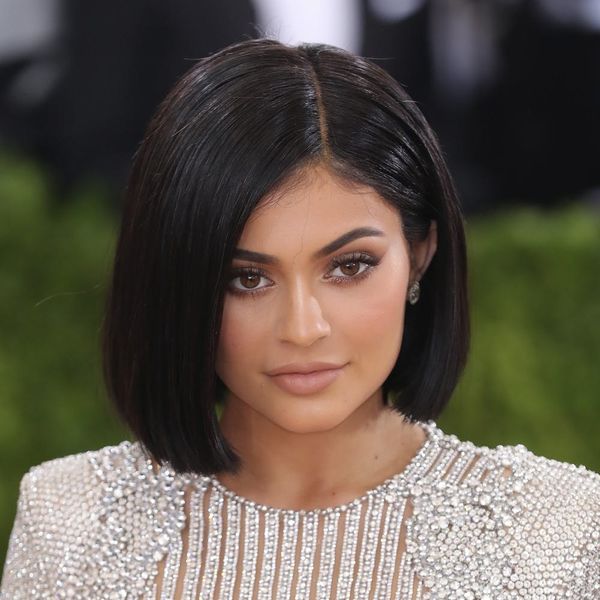 Kylie Jenner is just as skilled as her sisters at the makeup game. Always on point when it comes to her look, it’s rare to see the reality celeb not totally done up. Lips in every shade under the sun, dark-lined eyes and expert contouring is the way we see Kylie 99.9 percent of the time. But that slight other percentage has given us a peek at a makeup-free Kylie, and wow! Still totally gorgeous, but there’s one major difference that you’ll definitely notice:

Okay, bear with us here. Though it’s easy to think of Kylie as a full-on adult (which, legally, she now is), with her years in front of the camera and making headlines since before she even graduated, not to mention a super made-up and polished look, it’s easy to think of the youngest Jenner as much older than she actually is — just 18.

But in a new pic posted to Snapchat, Kylie reveals what’s under the layers of expertly-applied makeup. With fresh, untouched skin and what can only be described as an adorable button nose, Kylie is looking like a straight-up teen. No hate for those who mix it up and look however young/old they happen to look, but this is definitely a noticeable difference… and sharing her face au natural shows a lot of confidence in her own skin.

Big sister Khloe Kardashian has weighed in on Kylie’s no-makeup selfies in the past, telling People Style: “I’m so proud of Kylie cause I love when she is bare-faced and at her freest,” she said. “When I was younger, I never wanted to be bare-faced, cause you’re a little more insecure. So I love Kylie’s self-security at a young age.”

With other celebs — like Alicia Keys — fully ditching makeup, we can’t see cosmetics guru Kylie doing the same, but it’s still a good idea for everybody to give their skin a break once in a while. With the caption, “No makeup Tuesdays,” it looks like this might be a weekly thing. Perhaps we’ll see more fresh-faced Kylie in the future.

What do you think of Kylie’s makeup-free look? Tweet us @BritandCo!