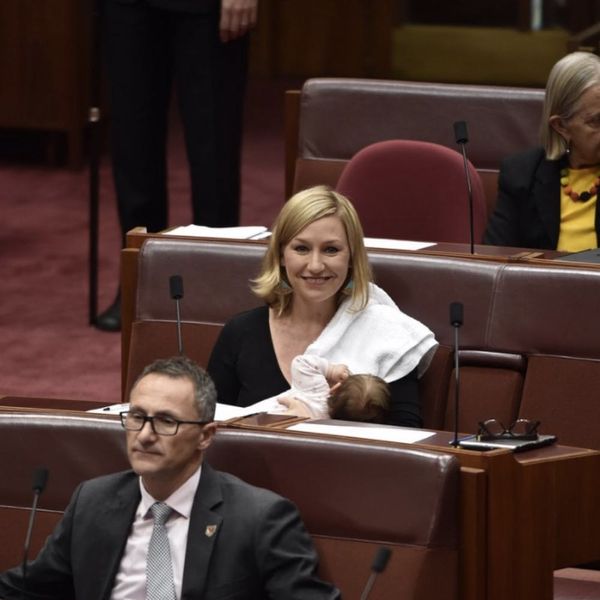 Ladies First is a weekly series that highlights women and girls who are making the world better for the rest of us.

Despite the progress being made toward equality for women in the workforce around the world, many injustices remain. But things are slowly changing: Equal pay for women is now the law in Iceland, and recently, an Australian senator made history as the first to breastfeed her baby in Australian Parliament, a huge step toward further helping women balance their lives and careers.

So proud that my daughter Alia is the first baby to be breastfed in the federal Parliament! We need more #women & parents in Parli #auspol pic.twitter.com/w34nxWxG0y

Deputy Leader of the Australia Greens, Senator Larissa Waters, returned from maternity leave with her infant daughter Alia Joy in tow, and when little Alia was hungry — get this — Waters fed her.

The photo of Waters and her daughter resonated with women across the globe, and she says the most inspiring reaction she’s seen has come from women sending their gratitude. “[There’ve been] many comments by women through social media thanking me for sending the message that women belong in the places of power usually dominated by older males,” Waters tells Brit + Co in an email. “The more of us there, the more we can change things for all women.”

Waters played a huge part in changing Australia Parliament’s rules last year to allow this to happen, and she joins other politicians such as Italian MEP Licia Ronzulli, Carolina Bescansa with Spain’s Podemos party, and Icelandic MP Unnur Brá Konráðsdóttir, who in October 2016 became the first MP to feed her child while addressing parliament.

Tori Sproat is a Registered Lactation Consultant and an Education & Outreach Coordinator with the Best for Babes foundation, a breastfeeding support organization. She sees Waters as a positive force for not only normalizing breastfeeding, but supporting parents in the workplace.

“Australia is already doing a wonderful job supporting breastfeeding parents through paid leave and supportive workplace practices,” Sproat tells us via email, also noting that Australia’s upholding of the World Health Organization’s formula marketing rules helps to prioritize breastfeeding. “It’s no surprise to us to see her nursing at work — it’s the result of a country and its citizens coming together to prioritize public health, and it’s wonderful!”

Australia has had an 18-week paid parental leave policy since 2011, and Sproat says that the tides are slowly — hopefully — turning toward a more balanced professional life for parents and, ultimately, families.

“Hopefully there will continue to be normalization of breastfeeding, and parents are supported in choosing to become parents while also being members of the workforce.”

As for Senator Waters’ infant daughter, Waters says, “I hope she grows up in a world where it is normal for women and mothers to participate in all areas of public life, including politics.”

Do you think new moms should be allowed to breastfeed at work? Let us know @BritandCo!