Learning to Knit With the Ghost of My Grandmother 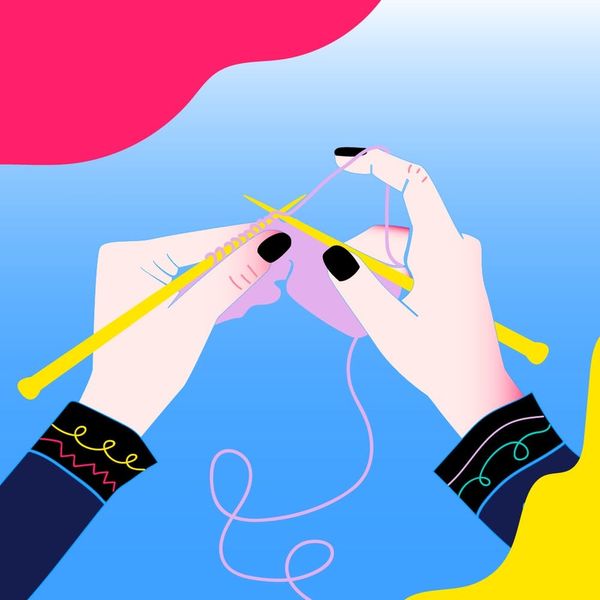 There’s a sweater hanging in my closet that, to my knowledge, I’ve only worn once. It is small, a child’s fit, because it was meant for a child. Sky blue, dotted with the white outlines of waves — and smack dab in the front and center, a demented looking whale smiling goofily out from the wearer’s chest. It is an eyesore. The knit water spurting from its blowhole looks, truly, obscene. And it is precious to me, as it is one of the only physical reminders of my grandmother that I keep with me.

One of the others is a large sweater, a black/dark blue base run through with ecstatic, broken bands of color. I wear it as a dress over tights in the LA winter. It’s probably too heavy of a knit to wear like that for it weighs down my silhouette, and there’s a stain that I’ve never tried to get out breaking up a bright yellow stripe. But I love running around the city in this gorgeous, itchy, unreplicable sheath.

When I was a child, my mother’s parents lived in the family home. My parents never hired a babysitter; instead, it was under my grandparents’ watchful eyes that I would do my homework, practice playing instruments, while away time until my parents filed home. I remember crying once when my grandmother caught me throwing away my chalky Flintstones vitamins and scolded me; I also remember crying when she unraveled a long chain of my beginner’s crochet work. The loops weren’t tight enough, she explained, and so she took it apart, the yarn crunched up in its remembered shape. I haven’t touched a crochet hook since.

But I’ve traced the outlines of her considerable crafting legacy, working in the shadow and memory of her skill. In high school, I taught myself how to sew a bit, hemming pants and shirts and stitching up seams. She sewed dresses for her daughter and knitted sweaters for her granddaughters. The former were simple, fitted daywear rendered in muted hues. The latter were riots of colors and patterns and scenes. A cluster of pandas on a bright red background; a family of geese framed in a verdant pastoral; a (somehow) lilac construction site replete with machinery and a dark brown knit ditch, with the sleeves capped off in inexplicable black and white checkerboard.

On top of sewing and knitting, she crocheted scarves and miscellany for the entire family. Toward the end of her life, she also took up cross-stitching, meticulously researching patterns and sharing them with her friends at the senior center.

My grandfather was the musical one, the showboat between them. My grandmother made. A quiet, studious, and creative woman who left her family legacy in color and who left me with a canyon of questions I never thought to ask until it was, predictably, just too late.

Like: Did you ever try to teach my mother these skills? She can sew a bit, but I’ve never seen her pick up a pair of needles or a hook. Maybe I’m just forgetting what she’d made, in the light of your own work. Maybe that’s why she never got that far. And: Where and how did you learn how to do all these things? Why didn’t you push me more when I was a child? Why didn’t I listen to you? Why didn’t I try to learn from you? Why did my mother hide your cancer from me until you’d passed, so I didn’t even have the time to realize what, and who, I was about to lose?

Later, I received a gift. He meant them as a suggestion: a birthday present of a bag and a book. The book in question is Bust magazine co-founder Debbie Stoller’s Stitch ‘n Bitch, a fitting gift from a women’s studies major to his feminist girlfriend. And in the bag, seemingly a thousand pairs of knitting needles lined up in neat little plastic packets, and two spools of yarn.

I didn’t touch that bag for the rest of the year. It was a fixture of my room, gathering dust, kicked around from space to space around other reorganizations. It wasn’t that I didn’t want to knit; in fact, it was because I’d talked about my grandmother, and mentioned wanting more tactile hobbies, that he’d thoughtfully selected such a gift. But their presence shook a peculiar feeling out of its dormancy, a reaction he couldn’t have foreseen and I had been suppressing.

For the past couple of years, I’ve begun to take cooking seriously. Part of this comes from living well apart from my mother’s cooking, and part of this comes from wanting to learn more practical skills. The knitting fits into this pattern, of realigning some part of myself to my family’s lineage of ability. But I was, and to some extent still am, wary of perpetuating this idea of domestic-coded tasks as female, or femme, or worst of all, man-trapping bait.

He didn’t buy me needles so I could make him sweaters and scarves; I’m not learning new cooking skills to set up elaborate feasts for my breadwinning man. The arguments are, of course, only in my head. But how could they not be there, when it was only my grandmother’s work that hung in my family’s closets, hugged us on cold days and draped over us on warm ones? When it was my mother who mended the rips and stains of my clothes? When the popular image of knitters is still of old women doting on the begrudging members of their families; yes, Grandma, thanks for yet another pair of socks.

It’s not fair to chalk my reticence all up to that. There was also this: How would I ever be able to match my grandmother’s tacit standard? I know I hadn’t met it before, and the fear of the learning curve is additionally real when it’s touched with love, with loss. It could be enough to just celebrate her work and share it with others. But if I hadn’t given up as a child, become frustrated in the face of her expertise, I wouldn’t have to think about these questions now, a world away from her save for the memorials she made to be worn. And so, I decided to learn.

I started knitting only a couple of months ago. I’m in the middle of making a scarf, I think, which is great timing as Los Angeles barrels toward summer. Oh well; it’s the process I’m after, and that itself is relaxing. The needles are bamboo so they don’t really clack, but I find myself muttering my knits and purls under my breath, leaning into this unsteady rhythm. It is what I owe her, to really learn in earnest this time around. I don’t know if I’ll ever be able to replicate her designs, or ever match her skill. But I’m okay with that, as long as I push myself to keep picking up the needles, the book, the work. It’ll take a while before I can even start to think about designing a sweater, so there’s much to practice. I only have so much time in the world.

Has a loved one ever inspired you to learn a new skill? Tag us on the goods @BritandCo!