Is This the Coolest LEGO Hack Ever? We Think So! 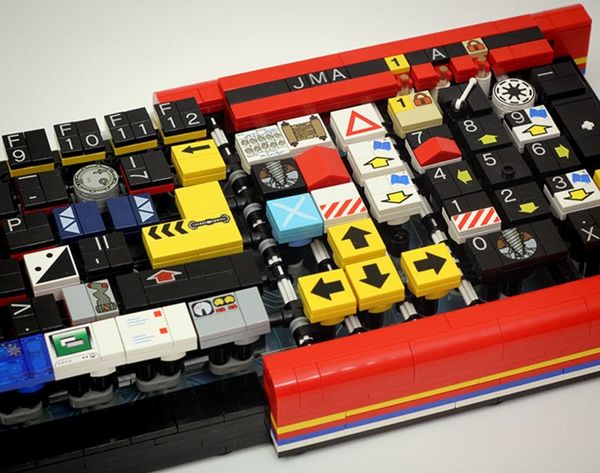 Time to strap your little plastic LEGO hard hat on and pretend it’s a thinking cap, because we have a reimagined keyboard that’s going to get you typing to find your next DIY project. After spotting a discarded keyboard, LEGO builder extraordinaire Jason Allemann was inspired to pick up where he left off on a forgotten project. One dude’s trash became this one’s LEGO keyboard.

Jason took the keyboard apart and set its sensor pad, circuit board and computer cable in a basic LEGO frame made with plates and tiles. He needed the LEGO keys to work with the keyboard’s sensor pad so he built a grid using Technic axles (a LEGO theme often used to create model machines and mechanical toys) and connectors that lay flat above the pad. The keys were made of Technic axles too.

To stay true to his medium, Jason refused to use custom-printed tiles or stickers and worked with what LEGO already offered to designate each key. Take a closer look at them… the “home key” is a sloped roof, scroll lock is a printed tile of a scroll, print screen is a tile of fingerprints, a control panel marks the control key. We are particularly big fans of the sock as a question mark and a baseball cap and printed lock tile combo for the CAPS Lock key. Um, genius. The keys even come off easily in case you want to upgrade them with something else as new LEGO sets are born.

Check out his YouTube demo above! It looks like the keyboard types just as easily as yours does. And this one’s way cooler. Admit it.

If this doesn’t inspire you to bust out a LEGO set, it might make you dig into your own personal DIY project vault to revive one you’ve tabled. Seriously, when were you this impressed by the “After” pic for somethin’ somethin’ originally found on the side of the road?! Go forth and create, with LEGOs or without :)!

What’s the wackiest thing you’ve ever created from LEGOs? If you have a pic, we want to see it! Tweet it @BritandCo!

Lisa Raphael
In her past professional lives, Lisa has served the masses as the Editorial Director at Brit + Co, Bieber Whisperer at J-14, Golden Girls Fan Club Prez at Lifetime and Talk Show Host Understudy to Katie Couric. Now, she's taking on the sports world at The Relish, teaching Hairography 101 in her spare time and will forever be trying to fill the hole Zayn Malik left in her heart.
lego
Tech
lego
More From Tech