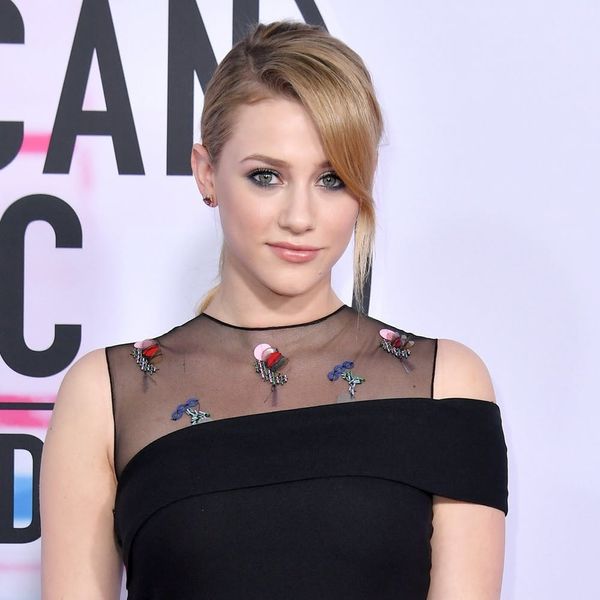 As one of the breakout stars of Riverdale, Lili Reinhart is still getting used to life in the spotlight. But the actress has been refreshingly honest with fans about her life behind the scenes, even when the subject is not so glamorous — like her battle with anxiety and her skin issues. In a new interview with Seventeen, Reinhart opened up about her cystic acne, and what she said will totally break your heart.

The Galveston actress told the magazine that she developed “really bad acne” in 7th grade, sharing that she “developed slight body dysmorphia.” She added, “when I would break out, I couldn’t look at myself in the mirror for a couple of months at a time. I remember doing my makeup before school in the dark, which is an awful idea, but it’s because I didn’t want to see myself in that bright light.”

And even though she’s a fan of some of our favorite drugstore beauty buys, she still has cystic acne. As acne sufferers know all too well, zits rarely go away when the teen years are over. Reinhart says that she still faces breakouts, and at times her skin has kept her from leaving the house. “Sometimes when I have a breakout it triggers me back to that time when I was a teen and I feel so self-conscious — like the whole world is looking at my bad skin. I’ve definitely not gone out of the house because of a breakout, which is horrible.”

Back at it again with the best hair/makeup team 👏🏻💋💄

But she tries to be gentle with her skin, reminding herself that her body is still changing. “I’m still growing up — my body’s still changing. Maybe my acne will go away eventually, but for right now, I try to acknowledge it [like in my] Instagram stories when I’m wearing pimple cream on my face. And poke fun at it in a way, as much as I can. At the end of the day, I tell myself that if I’m walking down the street or having lunch, other people don’t give a shit what my skin looks like — it’s just me, who cares?”

Can you relate to Lili’s struggle with acne? Let us know@BritandCo.

Arielle Tschinkel
Arielle Tschinkel is a pop culture junkie who went to NYU because the Olsen twins went to NYU (really). She is a freelance writer whose work has also been featured on HelloGiggles, Refinery29, SheKnows, Bustle, Hollywood.com, and many others; and she's living her dream one Britney Spears GIF at a time. Follow her on Twitter @mrstschinkel or visit her website at arielletschinkel.com.
Celebrity Beauty
Beauty News
Celebrity Beauty Skinspirational
More From Beauty News