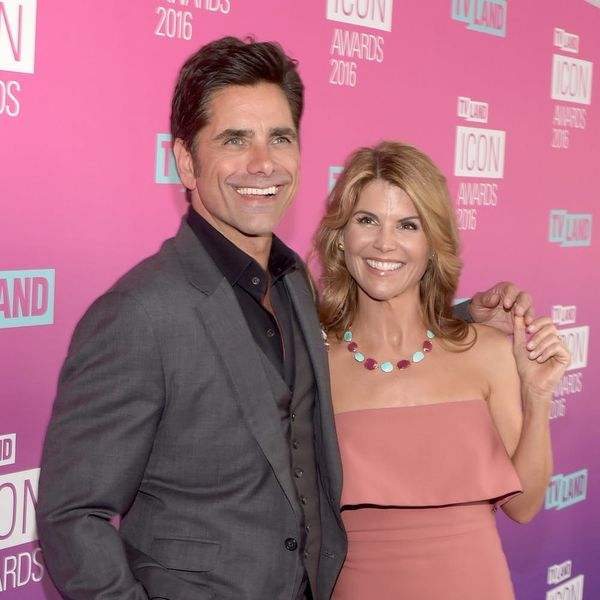 Have mercy — Uncle Jesse is 54! The Fuller House star, who, along with the rest of the cast, is gearing up for season three of the show, celebrated his big birthday yesterday, and his TV wife of 30 years (AKA Lori Loughlin) had an absolutely hilarious tribute to post in his honor.

The Every Christmas Has Its Story actress shared a video to Instagram of the two of them reenacting an iconic scene from Step Brothers, in which Stamos is mentioned, that had us actually laughing out loud.

Happy Birthday to this ageless vampire! Thank you for all the years of love, laughter and fun! 😘🎂

“If you were a chick, who’s the one guy you would sleep with?” Loughlin mimes, playing the part of Will Ferrell’s character of Brendan Huff.

“What! Did we just become best friends?” Loughlin asks her castmate. “Yup!” Stamos replies, as Hall & Oates strikes up in the background. Oh. Em. Gee!

Loughlin also included a sweet caption with her vid, which read, “Happy birthday to this ageless vampire! Thank you for all the years of love, laughter, and fun!”

She wasn’t alone in her well wishes — the rest of the cast, including Jodie Sweetin, Candace Cameron Bure, Dave Coulier, and Andrea Barber also took to the ‘Gram to send their love, with the latter proclaiming, “He’s still got it. ;).“

And the birthday fun didn’t stop there! The now 54-year-old also took to his own page to show off his, erm, assets, and offer up some of the wisdom he’s garnered throughout the years.

“It’s a wonder just how much of life sits before eagerly (almost impatiently) waiting to reveal its gentle, imperfect, often unimaginable beauty,” he wrote of a previous post. “When I’ve been willing to suspend my judgment, hold my criticism, positively find the positive, and most importantly, embrace wonder, I’ve found authentic happiness,” he shared. “To stumble safely this far together is a real wonder. Thank you for the lovely birthday wishes. Sending you much, much love!”

What’s your favorite Uncle Jesse moment on Full/Fuller House? Share with us @BritandCo.