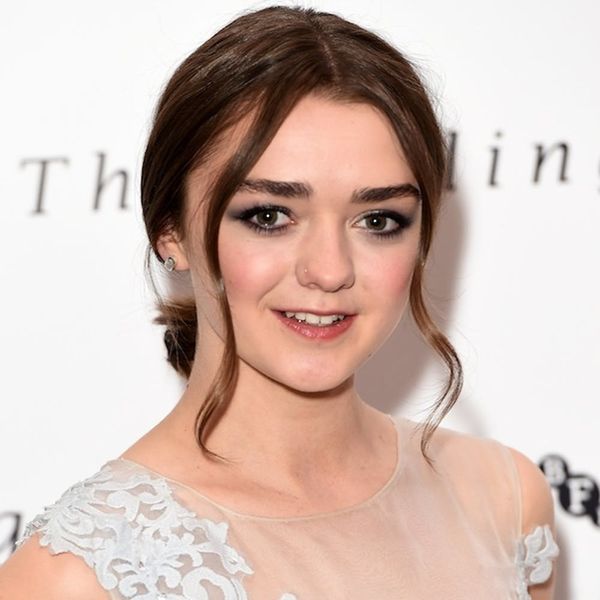 It’s been three months since the end of season five of Game of Thrones and we’re still having withdrawals. It’s invaded every part of our lives from cool makeup inspo to baby names and now, we have to wait a whole EIGHT MONTHS before we get our fix. Sure, we could read the books, but since they get kind of snoozy after book four (sorry George) it’s lucky that we now have a way to slake our thirst while still watching good stuff.

Maisie Williams AKA Arya Stark AKA my dream celebrity best friend launched her very own Youtube channel today in honor of reaching one million followers on Twitter, and her first video is pretty cool: a cute Q&A with fun surprises like a cameo from her TV sister Sophie Turner (who smells like heaven). While Maisie said that it might not be updated regularly (which gives fans hope that maybe Arya still has a big part to play in GoT), there’s still plenty of reasons to subscribe to this budding starlet’s channel. Not only does she promise to share things that made her LOL, but also use the channel as an outlet to share her ideas and creativity. Pumped yet? Read below for the five reasons Maisie Williams could be your new favorite YouTube star.

1. Her Vines are hilarious: Long before she took to Youtube, Maisie was a Vine star. Lots of people think her iconic reaction to the Red Wedding is her best one but, personally, I still giggle every time I see this one of her “walking in” on some toothbrush love.

2. The cameos are gonna be sweet: Even if you’re not an Arya fan (I have a question: how dare you?) you should still watch this channel for the inevitable celebrity cameos. Since she’s BFF’s with Sophie Turner, it’s likely that she’ll be in a lot of the videos but who knows? The rest of the cast of GoT may just make the occasional appearance. Side bar: WHERE THE HECK HAS GENDRY BEEN? Someone please advise.

3. She has major makeup goals: Maisie’s social media is full of her daring attempts at trying new make up. It’d be no surprise if she used her channel as a way to share tips on how to get her looks.

My heart is actually melting bc of this picture my mum just sent me of Barney and his sons. Help.

4. There’s gonna be cute animals: The little logo for her channel suggests that her beloved pet tortoise is likely going to show up. Her Vine channel is full of fun videos of him “racing” and just being adorable so seeing him on Youtube would be an extra cuteness boost.

5. It could be your pass to the UK’s best music fests: Maisie does what any of us would do if we had time and money: she goes to hella music fests. She rocks cool looks at every fest in Europe from Glastonbury and beyond. Her channel could provide those of us on this side of the pond with cool insight into that music scene.

What celebrities do you wish started Youtube channels? Tell us in the comments!

(Photos via @masie_williams and Ian Gavan/Getty)

Molly Sanchez
Molly Sanchez is a writer, comedian and lover of burritos everywhere. She has written for The Bold Italic, Liquid Bread, Thrillist and HelloGiggles. She devotes her time to Bloody Mary research, exploring San Francisco and promoting wide spread shower beer awareness and appreciation. Find her on Twitter @seriousmolly trying to get famous people to laugh at her jokes or on Instagram @mollyfuckingsanchez where she swears a lot.
Game of Thrones
Home News
Game of Thrones YouTube