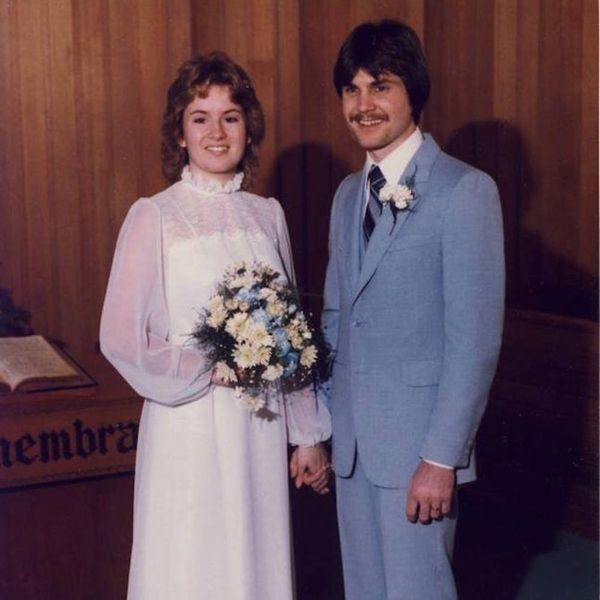 If you’re in the throes/craziness of wedding planning, you might have a moment where you think: Is this all worth it? It totally is. One study tells us that having a formal affair to celebrate your nuptials is actually good for the health of your marriage (woo hoo!). And if you are stressing that your vows have to be perfect, just remember that whatever you say will be lovely, endearing and heartfelt. You might not be able to imagine married life beyond figuring out how to change your last name, but we’re sharing married gals’ advice for the secrets to happiness in long-term love.

1. Don’t sweat the small stuff. It’s a cliché, but most of the couples we polled shared that if they could tell their newlywed selves anything, they would say that the little things aren’t worth fighting over. As Shari Green, who has been married for 32 years, puts it, “You can’t change the other person; you can only change yourself and how you choose to react.” (Photo via Shari Green)

2. Fight fair. Everyone — even the cutest lovey-dovey couples — argues, but it’s all about how you fight that matters. Ariel Owens-Barham and his partner Joey had a wedding ceremony in May 2008, then legally married at San Francisco City Hall a month later (in front of news cameras, no less!). Ariel shares, “You have to put to rest the days of making decisions solely based on your feelings, and learn to embrace cooperative decision-making. Choose your battles, and eliminate the need to always be right.” (Photo via Ariel Owens-Barham)

3. Make each other laugh. Several married women shared that having a sense of humor led to their happiness. Kathy Patalsky, married for nine years, says, “Never underestimate the power of laughter, and laughing together. It is a magic potion in times of frustration, hardship and even sadness.” Arlene Cohen Evans, married for 31 years, echoes Kathy’s sentiments, “If you can’t laugh with the person you’re with, then you’re not with the right person!” (Photo via Kathy Patalsky)

4. Seek couples’ counseling. Often, we think that marriage counseling means that your relationship is in dire straits, but the truth is seeking counseling before you hit a major roadblock can lead to success in the future. Carol Grogan, who first started dating her husband 18 and a half years ago, sought a marriage counselor right after they got married. She says, “I can’t explain in words how much this helped! It was great to have a different person’s perspective to help you work through those first couple of years — and all its challenges. It’s a huge adjustment to get married.”

5. Leave little love notes. Valentine’s Day isn’t the only time to take pen in hand and script out a love letter to your significant other. Married for 11 years, Mary Rittenhouse suggests leaving your partner “lots of little love notes. This could be a text or a post-it on the counter. Just a few small, kind words go a long way.” Here are 25 love note ideas to get you started. (Photo via Mary Rittenhouse)

6. If/when you have kids, make date night a priority. Yes, married life after having kids changes the dynamics of your relationship, but these smart couples got creative to keep their spark alive. Nikki Santacroce, who married her partner in May 2010 and had her first kid in October 2013, shares this important piece of advice: “Remember you were a hot and sexy twosome before becoming parents. You need to still date your partner and have multiple babysitters at the ready. It’s okay to have a life outside of the baby.” Ariel, as a father of one, suggests “making friends with other parents who you would trust to watch your child, especially if you don’t have family nearby. Date nights are a must for the well-being of the family as a whole, but in order to enjoy the time away, you’ll want to know that your child is being cared for by like-minded individuals.” (Photo via Nikki Santacroce)

7. Figure out finances together. Money issues can be a touchy subject for any couple. Talking about short-term and long-term financial goals is a great way to make sure you’re both on the same page about major financial decisions. Says Carol, “I was determined to find a husband that shared similar views on how to spend money. If you’re not on the same page financially, sit down with a financial planner to figure out a game plan on how to work that piece out.”

8. Take time away from each other. Absence does make the heart grow fonder. Scheduling some relaxation time apart, whether with your friends or solo vacays, is a healthy way to keep your individuality and sanity. Joni Marie Newman, who has been married for 10 years, says “Separate vacations. LOL. But seriously. We take most of our trips separately, and maybe one together each year.” For pin-worthy inspiration, check out these affordable travel destinations. (Photo via Joni Marie Newman)

9. Don’t give up during rough patches. In the long life of a relationship, couples are bound to hit some highs and lows. Jenny Kaczorowski got married in her early, 20s and 11 years later shares these wise words: “Our marriage works because we are committed to making it work. At the core, we respect each other and are committed to seeking the best for each other, even when it’s hard.” Joni started dating her husband when she was a teenager, so they’ve been through a lot together over the years. “My advice is to not give up too easily,” she says. “We had some really bumpy times. There was a period of two to three years in the middle that were pretty miserable. We had to get through that to get where we are now, which is the best place in the world.” (Photo via Jenny Kaczorowski)

If you’re married, what advice would you share with newlyweds? Tell us in the comments!

From Your Site Articles
Jennifer Chen
Jennifer Chen is a freelance writer and editor living in Los Angeles. She's written for O, The Oprah Magazine, Good Housekeeping, Real Simple, and several other publications. When she's not cooking delicious vegan meals, she's hanging out with her TV writer husband and twin girls.
Home News