What You Should Pressure Cook Tonight, According to Martha Stewart 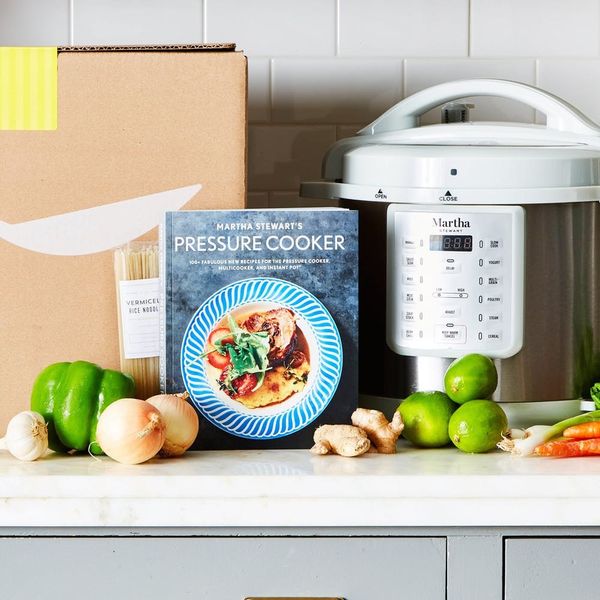 It would be an understatement to say pressure cookers, slow cookers, and all-in-one multi-cookers like the Instant Pot are having a moment, so it makes sense Martha Stewart is providing fans with several goods to fuel their obsession. She just released a cookbook, Martha Stewart’s Pressure Cooker ($26) in August, plus Martha & Marley Spoon, her meal delivery service, is featuring one Martha Stewart pressure-cooker recipe a week through October 1. As if that’s not enough, she’s gearing up to launch her own 14-setting multi-cooker, The Martha Stewart Everything Pressure Cooker ($120), available November 7 on QVC and late November on Amazon.com. Because of these exciting new projects, we had a chance to speak to Stewart about pressure cooking and to share one of the cookbook’s mouthwatering recipes with you.

Since pressure cookers have been around for several decades, we had to know why America is so enticed with the technique, particularly now. Stewart explained, “Well, T-I-M-E and lack of. We are all trying to pack in so much. And that little thing you’re holding in your hand [i.e., cell phone] has taken away most of our time. We’re looking at Instagram and not thinking about cooking. I thought that the internet would save us time to do other things, when actually it’s the opposite. But I really believe [the multi-cooker is] a time saver, and we need one.” According to Stewart, her Everything Pressure Cooker cooks up to 70 percent faster than the stovetop. That means a 20-minute one-pot recipe could potentially pressure cook in a mere six minutes.

As for her fave meal to pressure cook from the new cookbook, it’s the Arroz Con Pollo (rice with chicken). We tried it at home and could not believe how quickly it all came together. Plus, we had plenty of downtime to do important things like, er, scroll through Instagram and catch up on our fall TV queue. Find the recipe below, then pick up the new cookbook to take a look at her favorite dessert, English Plum Pudding.

Recipe Notes: We had a really hard time finding the annatto paste the recipe calls for. Your best bet is to get that on Amazon ahead of time. We improvised by combining annatto powder and chili paste.

1. Heat oil in a 6‐ to 8‐quart stovetop pressure cooker over medium‐high or in an electric pressure cooker set to sauté. Add chicken, skin side down, and cook until golden brown, flipping halfway through, about 8 minutes total; transfer to a plate.

2. Add onion, green and red bell peppers, and garlic. Cook, stirring, until softened, 5 to 8 minutes. Crumble in annatto paste and add 1 1/2 teaspoons salt. Cook, stirring, 1 minute. Return chicken to cooker along with any accumulated juices, and turn to coat with vegetables. Stir in the water and bring to a boil. Stir in rice and olives.

Electric: Manually set cooker to 12 minutes and let it come to pressure. Once time is complete, turn off, quickly release pressure, then remove lid. If rice isn’t fully tender, close lid to let rice continue to steam, 5 to 10 minutes.

4. Top with cilantro leaves, if using, and serve.

Gabi Conti
Gabi Conti has two passions in life: food, and dating. She went on 10K hours of dates in her 20s and is sharing her knowledge in her first book 20 Guys You Date In Your 20s, which drops with Chronicle in the spring of 2020. Gabi is a writer and host, who currently hosts and writes a weekly entertainment show Hollywire Vlogs, she wrote and hosted 423 episodes the Elite Daily Show for Verison’s go90 and Elite Daily. She has contributed dating and wellness articles to Cosmopolitan, Hello Giggles, POPSUGAR, mindbodygreen, and Elite Daily. You can follow her on Instagram @ItsGabiConti.
Comfort Food Recipes
Recipes
Comfort Food Recipes Cookbookmarked Dinner Recipes Pressure Cooker Recipes
The Conversation
More From Recipes