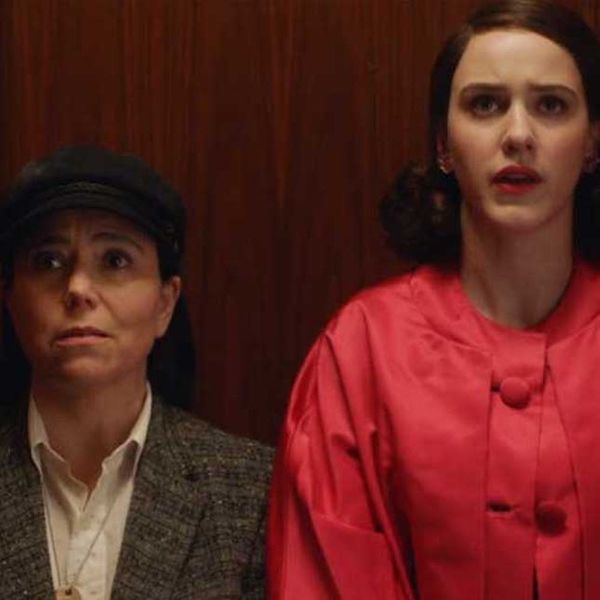 Confession time, gang — I’m starting to get sad that The Marvelous Mrs. Maisel’s first season is only eight episodes. I like this show more and more with every passing episode, and it seems like there should be more than just two episodes left. Fortunately for us, Amazon has already picked up the show for a second season.

Until then, let’s enjoy these last few offerings we have. Episode six might actually be my favorite episode so far, because it gives us such great stuff between Midge and Susie. Their relationship is clearly going to be the heart of the show as it goes on, and I love that. I especially like how Randall didn’t turn into a new love interest for Midge. Instead, the episode ended with her falling into Susie’s arms, rather than Randall’s or, God forbid, Joel’s. Well done, show.

But how did we get there? Well, Midge discovers that she can really hold court at parties, so she starts working the “circuit,” using her connections at B. Altman’s to get invited to soirees where she can practice her material. However, when Susie is invited to one, she sees what we all see — this is not stand-up. It’s playing to an entirely different (and easier) audience than what Midge will see in clubs, and it’s a safe space for her.

It makes total sense that Midge would want that kind of comfort level after the two times she bombed in the previous episode, but luckily for her, Susie is there to talk some sense into her about how it’s time to stop licking her wounds and get back out there.

In regards to Randall and his agent, Lew Fogelman, Susie is absolutely right that Midge A) doesn’t need a partner, and B) shouldn’t have spoken to other representation behind Susie’s back. But it wasn’t anything nefarious on Midge’s part. Plus, I think she and Randall do have nice chemistry and patter together. I actually wouldn’t mind if they occasionally worked together, as long as Midge doesn’t abandon her solo work to go hawk Buicks.

That’s really about all there is to Midge’s story line this week, which is also kind of cool. While I still could not care less about Joel, who is having some serious regret about what he did to his life, I do like seeing more of Midge’s family.

Her brother Noah is awesome, because you know he’ll totally be in her corner when her parents find out about her comedy work. And his wife is annoying, but she’s trying so hard and seems very sweet. She’s never going to win over her mother-in-law, Rose, but what can ya do?

Speaking of Rose, we saw her go to her psychic once before, and now that she’s done it again, I hope it’ll become a regular thing. She and Drina are hilarious together, and it really humanizes Rose — something her rigid character desperately needs.

It was also great to see the more human side of Abe. He gets a job offer from his dream workplace — Bell Labs — and he’s giddy as a schoolboy about it. Unfortunately, during his background check for the job, they find out about Midge’s arrests. Bell Labs doesn’t care in the slightest, but it is quite the bombshell to drop on the uptight Mr. Weissman.

His zoning out during a family dinner while he contemplates what to do about this newfound information is a perfect juxtaposition with the two underground record collectors deciding to turn a recording of Midge’s first Gaslight performance into an album. Because that’s another bomb just waiting to be dropped on the Upper West Side.

I will repeat that I cannot get enough of Drina and Rose.

Rose: “If the secretary were just out of the picture, Joel would come back.”

Drina: “You want her out of the picture? I have cousins. They have skills.”

Rose: “Being a divorcee is terrible, yes, but being on your second marriage is —”

Rose: “So much worse. Second marriage says failure. At least divorcee sounds continental. It’d be better if Joel had died. Then she’d be a widow; at least there’s dignity in that.”

Drina: “You want Joel to die? Again with the cousins.”

Susie: “You’re not an idiot! Just drop this doe-eyed Bambi thing right now. I’m so sick of you acting all innocent. ‘Oh, I don’t know how the world works ’cause I’m a housewife and I wear four layers of petticoats.’ It is tired and it is weak, and you are not tired and you are not f*cking weak. And if you wanna be a comic, you are gonna have to grow the f*ck up right now!”

What do you think of The Marvelous Mrs. Maisel so far? Tell us @BritandCo!