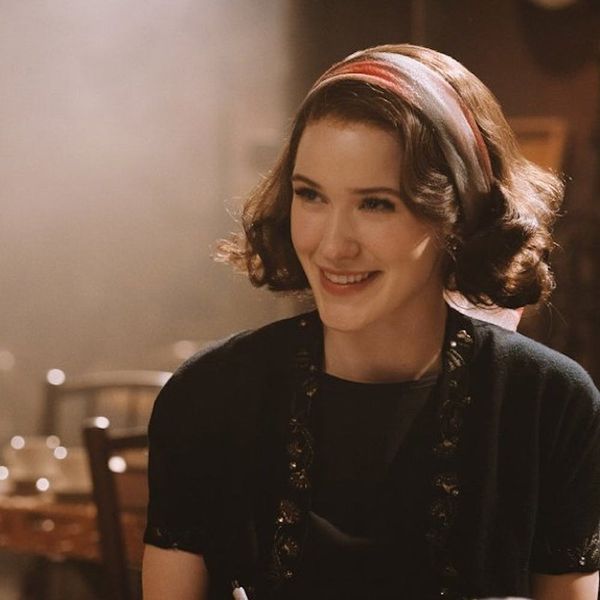 The Marvelous Mrs. Maisel is the latest original from Amazon Studios, created by Amy Sherman-Palladino and her husband, Daniel Palladino. They’re the duo behind the first six seasons (and the revival) of Gilmore Girls, strains of which can definitely be found in this new show. Mrs. Maisel is kind of Gilmore Girls meets Mad Men meets Crashing, as it tells the story of a New York woman in 1958 whose world comes crashing down when her husband leaves her for his secretary. She does what anyone would do in that situation… go into comedy.

Stand-up comedy, to be exact. Considering the time period, it’s certainly an unusual choice for Miriam “Midge” Maisel (Rachel Brosnahan), though one has to wonder how far women in comedy have actually come, since it seems like it has only recently begun to dawn on some people that women can be funny.

Anyway, the show gives a quick primer on Midge’s life before the divorce — being the wild girl at Bryn Mawr College, meeting her husband Joel (Michael Zegen), getting married, having two kids, going to great lengths to keep her “proportional” figure and to ensure that her husband won’t see her without makeup… you know, the usual. But shortly, we jump into the real meat of the series, when Midge finds out that Joel has stolen one of his best comedy bits from Bob Newhart. She finds out when Newhart appears on The Ed Sullivan Show performing the same routine, and rather hilariously thinks Newhart has stolen it from Joel. Oh, Midge.

After Joel bombs one night at the club, he blames Midge and wants to leave their marriage. He says he hates his job and comedy is his dream, so she advises him to write some jokes of his own and says she’ll work harder to help him with his act. But he doesn’t want this life. Plus he’s been having an affair with his secretary, so he’s out. Don’t let the door hit ya, Joel, you selfish jerk.

Midge is, of course, devastated, because her life just blew up. Her mother, Rose (Marin Hinkle), is also very upset, but more because of how this will look, and her father Abe (Tony Shalhoub) is angry — but not at Joel. He’s angry at his daughter and demands that she go get her husband back, because she’ll never make it on her own. Their reactions really take the wind out of her sadness sails, so she rage-drinks and goes down to the comedy club (in her nightgown, still drinking) to get back her Pyrex bakeware, which she used to fill with brisket as a bribe to the owner to get Joel better performance times.

As she wanders drunkenly on stage, Midge launches her comedy career by basically telling the story of her current situation with sharp, self-deprecating wit. It’s amazing. This show isn’t perfect — they can stop with the running joke about Susie (Alex Borstein) being a man anytime now — but Brosnahan is incredible in the title role.

In the course of her act, she ends up topless (which sounds weird, but works in context) and gets arrested for public indecency and performing without a cabaret license. In the back of the cop car, who should she meet but Lenny Bruce? He’s a real comedian, played here by Luke Kirby. It’s a brief encounter, but surely there are more to come.

Susie bails Midge out of jail and talks her up about what a natural she was on stage and how she has a real talent for comedy. Midge freaks out at first, but Susie eventually gets to her — and we’re off. She says she’ll be at Susie’s the next morning to work on her act, and then she goes to talk to Bruce when he gets out of the slammer, wanting to know if he loves being a comic.

He tells her it’s a terrible, terrible job… but obviously he loves it. So Midge is going to do it, and it is definitely going to be a fun ride.

What did you think of The Marvelous Mrs. Maisel? Are you all in on Amy Sherman-Palladino’s newest show? Tell us @BritandCo.