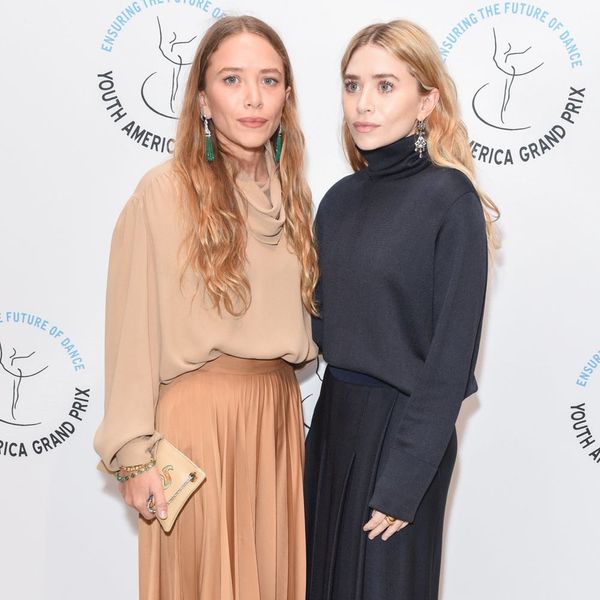 At age 31, Mary-Kate and Ashley Olsen don't just slay the fashion game, they are FASHUN. From their Full House days to now, the Olsen sisters have continued to up the sartorial ante with each outing. From their casual-cool (hipster, yet refined) everyday summer uniform to their avant-garde red carpet moments, the FROW-ready duo has practically grown up in front of our eyes. Keep scrolling for 23 of the fashion moguls' most impressive looks — coordinated, but not necessarily twinning — and a slew of style tips we've gleaned along the way.
Keep it short. Both outfitted in Elizabeth and James, Mary-Kate in a black lace kimono dress and Ashley in an orange bubble-hem frock, the style chameleons exude confidence in leg-baring styles. (Photo via Stefanie Keenan/Patrick McMullan via Getty Images)
Keep it simple. The CFDA winners have refined their "bag-lady" style with a rotation of pared-down neutrals and menswear-inspired separates (peep Ashley's button-front vintage coat dress and MK's crisp shirt and wide-leg trousers from their line The Row). (Photo via Taylor Hill/FilmMagic)
Too much is never enough. Inspired by Rei Kawakubo’s Fall 2015 "Broken Brides" collection, the Met Gala regulars showed up in coordinating Edwardian-inspired lace frocks from the early 1900s and ornate vintage jewelry. Ashley's eclectic green fur-trimmed jacket may be the real style MVP at play. (Photo via John Shearer/Getty Images)
Play with proportion. Should you ever have the urge to reach for a shimmery orange Dior Couture kaftan featuring exaggerated sleeves, don't let us stand in your way. (Photo via Karwai Tang/FilmMagic)
Modest can be hottest. MK leaves everything up to the imagination with her custom-designed black silk gown from The Row — accompanying earrings courtesy of Fred Leighton. (Photo via Larry Busacca/Getty Images)
Invest in statement sunnies. Never mind what they're wearing — just peep these two fashion insiders glamming out in their ubiquitous Chanel bug-eyed shades. (Photo via Serge BENHAMOU/Gamma-Rapho via Getty Images)
Size does matter. The name is Birkin. Hermès Birkin. The queens of travel style know a thing or two about luxury handbags, and it seems that bigger is always better. (Photo via GVK/Bauer-Griffin/GC Images)
Coordinating is better than matching. Granted, they may be twins, but they're style chameleons no less. We're loving the sisters' coordinating ethereal gowns (Ashley in a neck-plunging Christian Lacroix stunner, and MK in a gothic-inspired Lanvin creation). (Photo via Mike Marsland/WireImage)
Channel your inner Cali girl. It wasn't Mary-Kate's voluminous black dress but her sun-kissed complexion and perfectly tousled Rapunzel hair that exuded California-girl style to a T. (Photo via Jon Kopaloff/FilmMagic)
Do rock a cropped topper for instant after-hours appeal. Mary-Kate's cropped fur coat and floral Chloe maxi show that full-length layers aren't always the answer. (Photo via Joe Schildhorn/Patrick McMullan via Getty Images)
Ditch the heels for the after-after party. MK dialed it down in a vintage Chanel beaded gown, a fur-trimmed Balmain coat, and Louis Vuitton sandals. (Photo via Neilson Barnard/Getty Images)
Show logos some love. As this season marks the return of in-your-face logos, we couldn't help but point out Ashley's Louis Vuitton x Christian Louboutin shopping tote featuring edgy brass hardware. Werk. (Photo via Jamie McCarthy/WireImage)
Head-to-toe black is always in season. Cause you can't go wrong with a LBD, especially when it's an eternally fashionable elbow-length DVF wrap dress. 'Nuff said. (Photo via Charley Gallay/Getty Images for Diane Von Furstenberg)
Don't shy away from color. MK, the more risk-taking of the sisterly duo, knocked it out of the park with her extra AF Celine topper and cautionary orange trousers. (Photo via Jason Kempin/Getty Images)
Go back to basics. MK, who co-starred on Weeds, demonstrated major style know-how by teaming a low-cut American Apparel V-neck tee with a floor-grazing Azzedine Alaïa skirt and a cross pendant necklace. (Photo via Michael Buckner/Getty Images)
Give neutrals a night out. The sophisticated sisters complemented one another in twinning pleated maxis and turtlenecks during a rare outing — Mary-Kate in a beige kerchief neck top from The Row, and Ashley in head-to-toe navy. (Photo via Presley Ann/Patrick McMullan via Getty Images)
Keep an epic dress on standby. The belle of the ball, MK, turned heads in a Givenchy couture vintage dress and a jaw-dropping Van Cleef & Arpels emerald ring. (Photo via Dimitrios Kambouris/FilmMagic)
Comfort is key. During a recent West Village outing, Ashley rolled out in a borrowed-from-the-boys button-down, gray slacks, an oversized scarf, and white grandma-chic calf leather loafers from her contemporary label, The Row. (Photo via Alo Ceballos/GC Images)
Shades are nighttime appropriate. Sunglasses for the opera? Groundbreaking. Not to take attention away from the fashion moguls' accompanying YSL ensembles, but it's their circle gold-rimmed specs — by The Row, no less — that warranted a double take. (Photo via Charles Eshelman/FilmMagic)
A camel coat will never steer you wrong. Ashley Olsen expertly styled her camel coat from The Row with a turtleneck and Manolo Blahnik heels for a timeless look. (Photo via Frazer Harrison/Getty Images)
Incorporate some vintage into your look. Sleek 'dos and all, it's the fashion designers' fête-worthy vintage Ferre and Chanel frocks that channeled another era. (Photo via Dimitrios Kambouris/Getty Images)
Be bold. While understated elegance is their jam these days, that wasn't always the case. Back in 2011, the style icons pulled out all the stops in an ice blue sheath à la The Row and a shimmery gold sequined Chanel jacket. (Photo via Kevin Mazur/WireImage)
It's always cocktail hour. When you're a stylish Olsen about town, showing up underdressed just doesn't fly. Both sisters dialed up the drama in traffic-stopping black and embellished Badgley Mischka dresses, give or take a bold red lip for a dose of Old Hollywood glamour. (Photo via Billy Farrell/Patrick McMullan via Getty Images)

Which Olsen twin do you think has the most fab style? Follow us on Pinterest for celebrity style inspo!