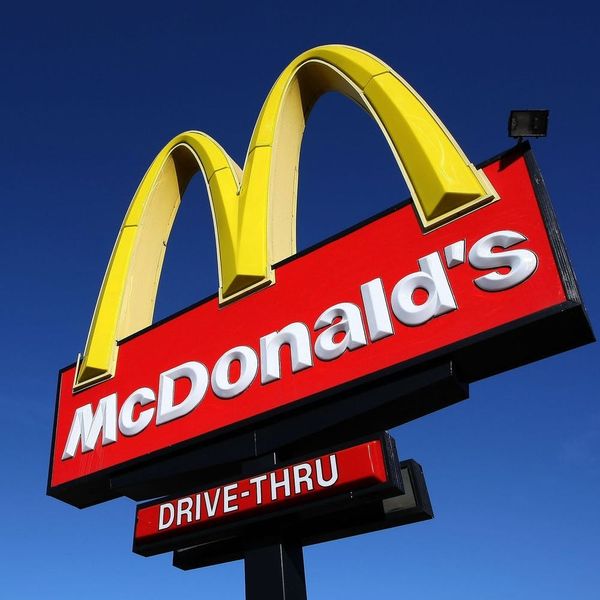 Valentine’s Day is right around the corner (11 days, to be exact!), which means jewelry sales are in full swing. There’s one particular piece of bling, however, that won’t cost you or your significant other a dime, and it’s worth more than a small car. That’s because McDonald’s is giving away a diamond-encrusted stunner to one lucky fan, and you’ve gotta see it to believe it.

The team behind those famous Golden Arches is stepping outside the fast-food box this holiday with a Valentine’s Day contest that will see the first-prize winner taking home the “Bling Mac” — a dazzling, bejeweled ring shaped like — get this — an actual Big Mac!

The piece, which is actually made up of seven separate pieces that quite literally take up half a finger, is made with 18K gold, champagne diamonds, and orange sapphires, and was created for you “to show just how big your Big Mac love is.”

So just how much does a… ahem …gem like this cost? Designer Nadine Ghosn‘s tasty-looking creation is reportedly worth $12,500. Wowza!

If you want a shot at adding this guy to your jewelry collection, simply craft a tweet “professing your love and devotion to the Big Mac sandwich” between now and 11:59pm EST on February 14. There are a few rules, of course: You have to tag @McDonalds and include the hashtag #BlingMacContest somewhere in your tweet.

Your submission also can’t be of a sexual, political, derogatory, or prejudiced nature, and it can’t promote violence, alcohol, drugs, weapons, etc, BTW.

Basically, play nice and have fun, and you, too, could soon be sporting some Paris Hilton-sized bling!

Would you rock the Bling Mac? Tell us @BritandCo!

Shea Lignitz
Shea can be found in the nearest bookstore or brewery, exploring the great outdoors, or blasting Led Zeppelin. She grew up in the cold and rain of Northern California's redwoods but is currently wandering around Texas.
Fast Food
Style News
Fast Food Jewelry rings