PSA: For One Hour Only, You Can Add Free Bacon to Any Menu Item at McDonald’s 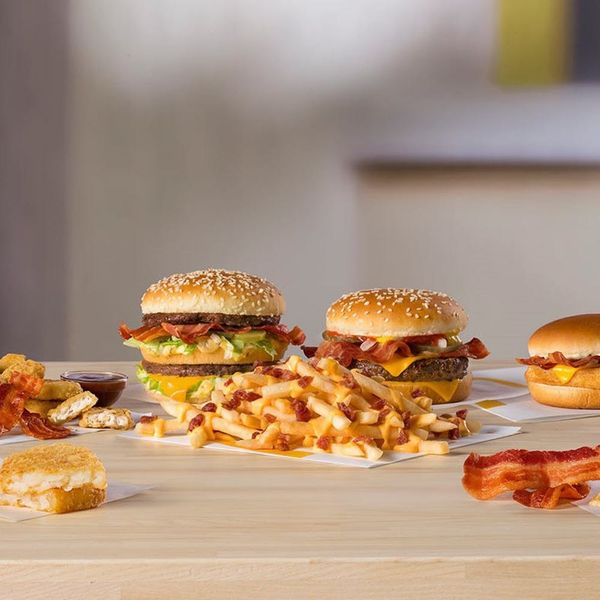 Just when you thought nothing could beat cheap drinks at happy hour, McDonald’s unveiled a life-altering concept: free bacon at Bacon Hour. For one hour only on January 29 at 4pm local time, you can order anything on the McDonald’s menu with a free slice of thick-cut Applewood smoked bacon at participating restaurants nationwide. While you’re dreaming up bacon-accented concoctions like Egg McMuffins and Oreo McFlurries, check out the event details below.

Bacon Hour is being offered in anticipation of the McDonald’s Bacon on Classics campaign, which starts for a limited time on January 30. The campaign includes bacon-ified versions of three McDonald’s favorites: the Big Mac Bacon ($5 for three pieces of bacon slapped on a double-decker cheeseburger), the Quarter Pounder Bacon ($5 to $6 for another triple-bacon burger situation), and Cheesy Bacon Fries ($3 for a pile of McDonald’s thin, crispy, salty fries, topped with a smooth cheddar cheese sauce and smoky bacon bits).

“January 29, we’ll be upping the bacon ante — the bac-ante, if you will — and celebrating this glorious food favorite like never before,” Chef Michael Haracz, McDonald’s Manager of Culinary Innovation, said in a press release. “I love bacon. America loves bacon. I really can’t wait to see the crazy and daring combinations our customers put together.”

You can use the Bacon on Classics lineup as inspiration for your Bacon Hour order, or you can construct your own crispy creation from breakfast to dessert. Our order? A very modest stack of Hotcakes (which we’ll top with crumbled bacon), a McChicken (which we’ll adorn with a slice of crispy pork), and a Hot Caramel Sundae (which we’ll dust lovingly with bacon bits for a salty-sweet combination). Whatever you choose, be sure to go to Bacon Hour with friends to sample multiple bacon-y treats, since you only get one side of bacon per order.