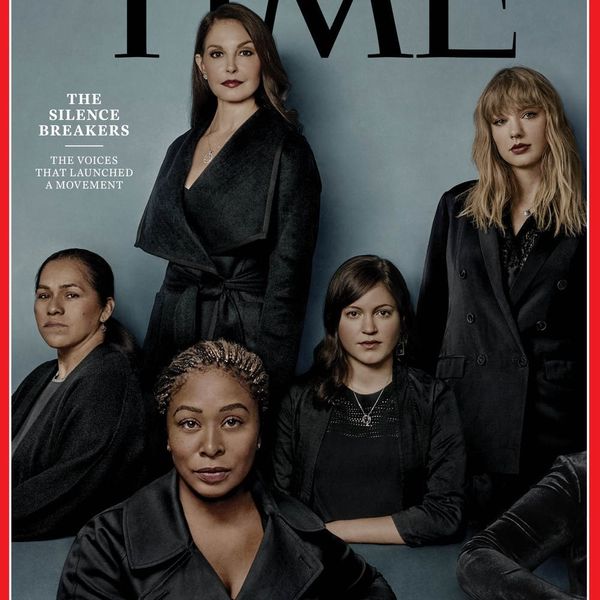 Taylor Swift. Ashley Judd. Alyssa Milano. Rose McGowan. Selma Blair. You probably know most of these famous women, and by now you’ve probably heard their stories. Judd was among the first to go to the media with her story of Harvey Weinstein’s gross hotel room behavior. The actor led the way for a very long list of Hollywood names — including McGowan — to come forward with their own stories about Weinstein’s alleged history of sexual assault and harassment. Swift went to court this year to countersue a radio DJ who sued HER for getting him fired after he groped her. She won. Selma Blair is one of the women who say that director James Toback assaulted her in a hotel room and then threatened her life. And Alyssa Milano picked up the #MeToo mantle from activist Tarana Burke to turn it into the biggest online movement of the year. All of these women are part of the group chosen by Time magazine as their “Person of the Year“ under the banner of “The Silence Breakers” — but there are many more women on that list whose names you’ve never heard.

Time’s cross-section of women includes university professors, hotel staff, dishwashers, tech world engineers, lobbyists, and seasonal farm workers. They don’t have Emmy nominations or Grammy wins on their CVs (or bank balances that end in a bunch of zeroes) and so the risk they face in speaking out is huge. So is the impact that their voices can have.

Susan Fowler is an engineer who documented her experience with sexual harassment at Uber in a blog post that went viral earlier this year. “When other women spoke out, they were retaliated against. So there were certain things that I thought I could avoid. And I had to make sure that every single thing that I included in there had extensive physical documentation, so it couldn’t be ‘he said, she said.’ And that’s what I did.” The company took her allegations seriously, investigating her claims and taking action. In the end, over 20 Uber employees were fired, including CEO Travis Kalanick.

At the Plaza Hotel in NYC, Dana Lewis is among a group of women who’ve filed a legal complaint against the hotel for its normalization of rape culture and harassment. Her daughter is one of the reasons she decided to speak up. “My entire life revolves around her,” she told Time. “I wasn’t really left with the option of leaving. I’m not left with the option of giving up. I want to show her that it’s OK to stand up for yourself. If you keep fighting, eventually you’ll see the sun on the other side.”

Sandra Pezqueda was harassed by a supervisor while she was working as a dishwasher. She told Time about how much harder it is to call out sexual violence when you’re not a woman in a position of power: “Someone who is in the limelight is able to speak out more easily than people who are poor. The reality of being a woman is the same — the difference is the risk each woman must take.”

Entrepreneur Lindsay Meyer is one of seven women to accuse venture capitalist Justin Caldbeck of sexual harassment. Meyer says that his constant unwanted advances “took a lot of energy to deal with and to try to process and to bury — because I didn’t want it to be a big deal. For so long I went around harboring this ridiculous belief that because I was a nonwhite woman in my 20s that somehow it was expected that I would have to be treated this way. Now I see that that is so silly. I am a person with dignity.”

“The galvanizing actions of the women on our cover… [has] unleashed one of the highest-velocity shifts in our culture since the 1960s,” says Time’s Editor-in-Chief, Edward Felsenthal, pointing out that 2017 was the year the “whisper network” moved onto social media networks. But not everyone is empowered to speak out.

“I thought, ‘What just happened? Why didn’t I react? Why couldn’t I force words out of my mouth?’ When I got home, I crumbled. I kept thinking, Did I do something, did I say something, did I look a certain way to make him think that was OK?” Those are the words of the one person on Time’s cover who you may not have noticed (that’s her elbow in the lower right corner). Her inclusion on the cover is a powerful reminder that there are still people who aren’t supported, believed, or free to go public — not yet, anyway.

California lobbyist Adama Iwu wants to change that. She’s the organizer behind a letter that highlights the sexual harassment in the state capitol. It has 147 signatures. “Young women told me about the same men who harassed me years ago. And all I did was participate in the whisper network: ‘Here’s what you can wear,’ ‘Here’s where you can go,’ ‘Here’s who to avoid,’” recalls Iwu, who recognizes that in this movement, women are beginning to find a certain kind of power in solidarity and numbers. “You have to address it head on and as a group,” she says. “It’s hard to call 147 women liars. We can’t all be crazy. We can’t all be sluts.”

What do you think of Time’s pick for Person of the Year? Let us know on Twitter.

Corrina Allen
Corrina Allen is a film + television + travel writer from Toronto. Her journalistic goals include a backstage interview with David Byrne, the fictional character she identifies most closely with is John Wick, and her favorite dead person is Vladimir Nabokov. She never, ever Instagrams photos of her food (just her dog).
Controversy
Empowerment
Controversy Taylor Swift