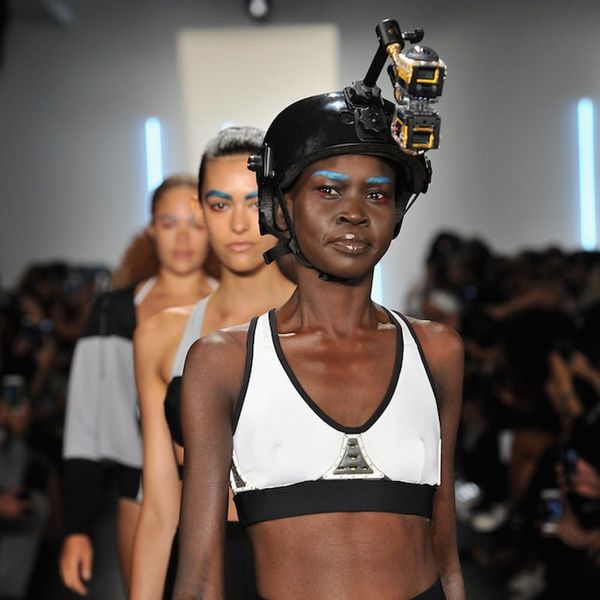 This is an exciting age for tech — you can now 3D print candy, we’ve witnessed the rise and now near-ubiquity of the iPhone and smartphones in general, soon electric and even self-driving cars may dominate our roadways. Technology has permeated every sector of our lives, including our clothing. It’s changing the way we shop, how clothes are made and fashion as we know it. Way beyond wearables.

Once upon a time, haute couture and ready-to-wear were differentiated by one being handmade and the other constructed with machines.“But recently this distinction has become increasingly blurred as both disciplines have embraced the practices and techniques of the other,” says Andrew Bolton, curator of the Costume Institute, in an interview with Vogue. Technology and fashion have been intersecting over and over lately. We saw it when Chromat did a collab with Intel for their NYFW show (above) and again when Apple announced that Hermès had designed a new band for the Apple Watch.

Who will be attending the Met Gala next year? All the usual suspects will be there — Anna Wintour, Taylor Swift, Idris Elba, Nicolas Ghesquière, Karl Lagerfeld and Miuccia Prada are all co-chairs for the Gala. But there are some new faces that are on the list. Jonathan Ive, the Chief Design Officer at Apple, has also been named one of the hosts.

Perhaps this means we’ll be seeing some other major tech industry leaders on the guest list for next year. Tim Cook is a given, but we also predict Elon Musk of Tesla snagging invites, and maybe even Regina Dugan, the VP of Google’s Advanced Technology and Projects (ATAP) group, who is spearheading Project Jacquard, Google’s collaboration with Levi’s to create connected, touch-sensitive textiles with conductive fibers.

What will guests be wearing? We have our predictions on that too. Last week at Paris Fashion week, designer Iris Van Herpen outfitted actress Gwendoline Christie (that’s Brienne of Tarth to you GoT fans) in a circular dress constructed by 3D printing, laser cutting and hand weaving — a design that seems to speak directly to the theme of this year’s Gala. A lot of haute couture has worked tech into their designs recently, so we might see Beyoncé in a gown by Chromat — after all, the brand has designed some of her outfits for the stage. Even high-end but more traditional labels like Valentino have experimented with laser-cutting, as they did with the gorgeous floral cutouts in their 2015 Spring ready-to-wear collection.

Tech + fashion = a marriage made in heaven.

What do you think of the Met Gala’s theme? Tell us in the comments below!

Kimberly Wang
Kimberly Wang writes about all things pop culture, tech, style, and beauty. She's a Bay Area transplant and has an MFA in Creative Writing from Columbia University. On a sunny New York day, you can find her hanging out with her mini schnauzer Isabelle Jellybean on a blanket in Central Park.
3D printing
Tech
3D printing Wearable Tech
More From Tech