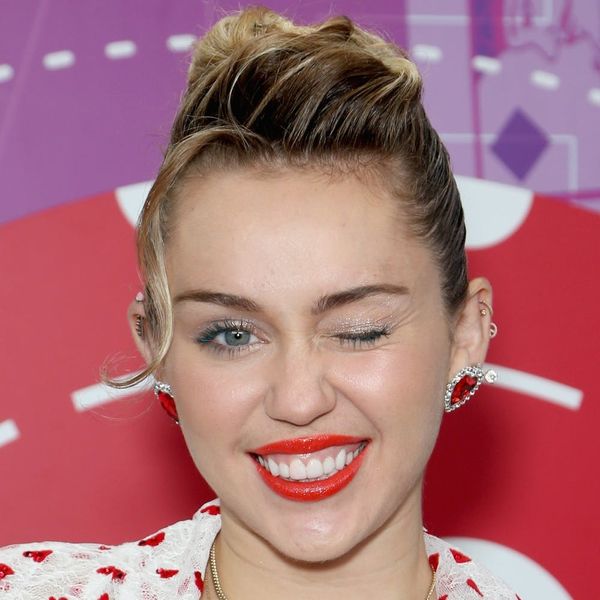 Miley Cyrus has never been one to play it safe in the fashion department: Girl has rocked everything from head-to-toe gingham to a full-on bedazzled Canadian tuxedo in her time. Though her style is slightly more demure these days, she’s still got a bit of edge, and her upcoming collaboration with Converse promises to be anything but tame. Rather, it’s chock full glitter and sparkles, making it 100 percent MC.

The 24-year-old first teased the collab on social media back in June, and yesterday, she was back on Instagram, showing off not one, not two, but FOUR of her new sneaker designs.

She kicked thing off with a power pink canvas number complete with a silver creeper-style platform covered in (what else?!) TONS of glitter.

Barely able to contain her own excitement, The Voice judge gushed over the kicks, saying, “Look what I got!!!!!! The very first sample of my collection with @converse!!!!” along with PLENTY of heart emojis and exclamation points. “I’m in loooooooooooooooove!!!!!!!!!” she continued. “They are even cuter in person BTW! BB pink glitter staxxxx!”

Next came a high-top pair with a flipped color scheme, coupling white canvas (with a cute little MC stamp on the heel) with silver shoelaces and a pink glittery sole that practically scream the unicorn queen’s name. “Are you freaking out?!?! Because I am!!!!!!” the songstress wrote. “Bubble gum glitter high-tops!”

For the less glitzy among us, the “Malibu” singer also offered up the shoe in a more subtle, low-top version with a smaller, silver glittered sole, as well as a total departure from all the shine with a white sneaker with black satin laces and a black bandana-printed sole. “One more cuz they’re just soooo cute! #Unisex” the Younger Now singer signed off.

No word yet on when the adorbs collab will hit stores, but the budding designer was spotted shooting the line’s ad campaign in Venice Beach yesterday, so we’re keeping our fingers crossed it’s soon!

Will you be shopping the Converse x Miley Cyrus collab? Tweet us @BritandCo.