Proof That Miley Cyrus and Liam Hemsworth Are Definitely Back Together 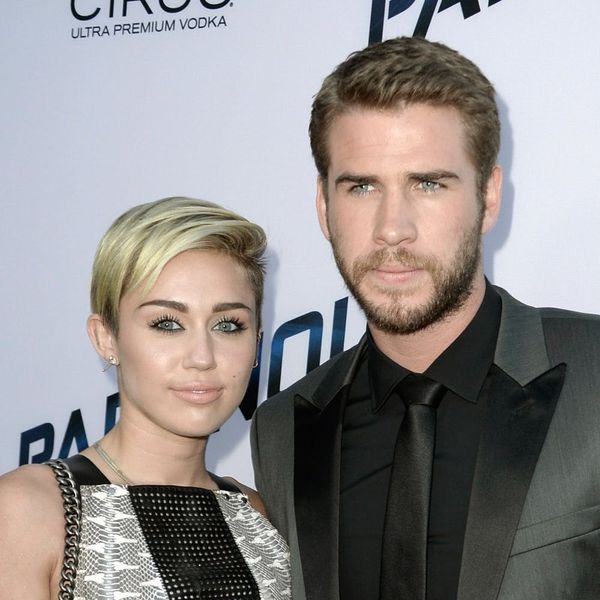 Are they? Aren’t they? All signs point to: They totally, definitely, 100 percent are! Yes, we’re talking about the celebrity couple that’s spurring the hottest gossip when it comes to the status of their relationship, Miley Cyrus and Liam Hemsworth. The once-engaged pair, who have appeared to reconnect in recent months (Miley’s engagement ring has even resurfaced), have confirmed that they’re a dating duo again with a public night out that has fans and romantics buzzing with delight.

While Liam’s bro Chris Hemsworth brought his lovely wife, Elsa Pataky, as his date to the LA premiere of The Huntsman: Winter’s War, Liam was seen arm-in-arm with former (and now current) fiancé.

Keeping a low profile, Miley and Liam skipped the red carpet and also slipped out of the theater before the lights came up, but those who spotted them said the two looked totally in love, with one source telling US Weekly, “They were smiling and looked happy to be together… Miley [was] looking adoringly up at Liam as he led her out of the theater.” Aaaaw!

One lucky fan even nabbed herself a couple selfies with the stars, with the caption, “For all you assuming I tell lies…#MileyCyrus #TheHuntsman #liamhemsworth”

Do you think Miley and Liam belong together? Have you ever reunited with a past love? Tweet us @BritandCo!

Desiree O
Desirée O is a ‘Professional Bohemian’ who loves anything and everything related to the arts, entertainment, and pop culture. She ADORES being a ‘Newsy’ for Brit + Co, covering all of the latest tidbits of awesomeness that you want to read about. When she’s not writing, she’s either making messy art, going on long adventurous walks with her camera, or poking around over at bohemianizm (http://www.bohemianizm.com/). You can find out about Desirée O and her work at http://DesireeO.com/ or follow her on Twitter @DesireeO.
Miley Cyrus
Celebrity News
Miley Cyrus