Morning Buzz! Miley Cyrus Got a New Tattoo and It Has a Special Meaning + More 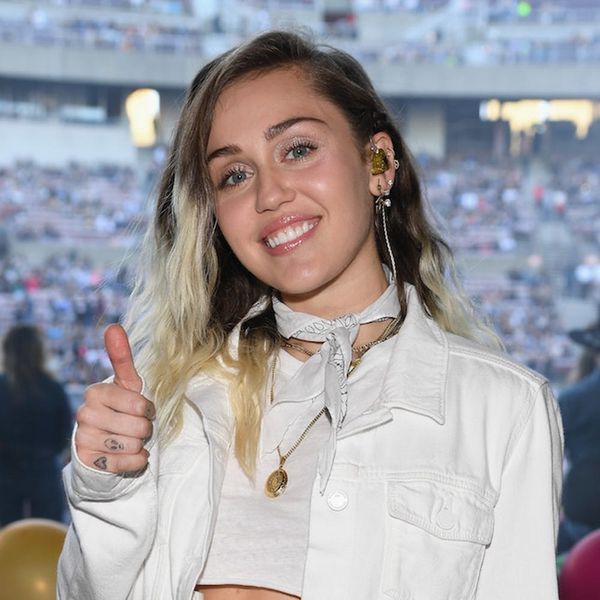 New ink for Miley Cyrus and another party for Penelope lead this morning’s top news stories. Check out those and more below in the Monday Morning Buzz!

1. Miley Cyrus is making a statement with her latest ink. The singer showed off a minimal, black-line tattoo of a sunflower with two leaves that form the shape of a V, for veganism. She captioned the pic, “Vegan for life!” and also included a green heart emoji, natch. Cyrus is a vocal animal rights advocate, and has been following a vegan diet for the past three years.

I can not believe my baby girl is 5 years old today 😭 Happy Birthday my sweet angel. I feel so blessed to be her mommy every morning that I wake up next to her.

2. Penelope Disick got spoiled at yet ANOTHER birthday party. After recently having a Moana-themed party with her cousin North West, Kourtney Kardashian’s daughter got ANOTHER bash for her fifth, featuring balloons galore, an adorable cupcake spread, LOTS of pressies, and even a performance from rapper/actor Jaden Smith!? Sure! Kourt had a sweet message for her little girl, writing, “I can not believe my baby girl is 5 years old today,” followed by the sobbing emoji. “Happy Birthday my sweet angel. I feel so blessed to be her mommy every morning that I wake up next to her.” Kim Kardashian shared a message for her niece as well, thanking her “for being the best friend to my North.” Awww.

Part of the funnest group ever ! Bye Tahiti !

3. Bradley Cooper and Irina Shayk made their first appearance together since becoming parents on a celeb-filled tropical vacay. How’s this for a star-studded group of friends? Bradley Cooper, Irina Shayk, Anderson Cooper (and his partner Benjamin Maisani), Allison Williams (and her husband Ricky Van Veen), Diane von Furstenberg, and Andy Cohen took a vacation together in Tahiti last week. Cohen had been posting Instagram pics and vids from the trip, but most recently, von Furstenberg posted a snap of the crew (minus herself and Cohen) that features the very sun-kissed and relaxed-looking new parents. (h/t People)

4. Patton Oswalt and Meredith Salenger responded to criticisms of their engagement. Nearly a year and a half after the shocking death of his wife Michelle McNamara, Oswalt announced his engagement to actress Meredith Salenger. Now, the pair are defending themselves against critics, with Oswalt saying on Facebook he “expected some bitter grub worms to weigh in (anonymously, always always always) with their much-needed opinions.” Oswalt linked to a blog post called “A Widow’s Rage Defense of Patton Oswalt’s Engagement,” written by Erica Roman, a woman who also unexpectedly lost her spouse. “It makes my heart happy to see that his heart has continued to move forward,” Roman wrote in response to critics who said Oswalt moved on too soon. “The love widows can have for someone new does not diminish the love of the one lost.” Oswalt and Salenger both expressed their thanks for the post. (h/t Us Weekly; photo via Dia Dipasupil/Getty)

5.This is the huge Facebook hoax going around you should know about. Have you been getting messages or seen people posting on Facebook warning against Jayden K. Smith trying to add you and hack your account? No worries — it’s just another hoax. False warnings pop up like this on Facebook all the time, and as Snopes reports, the names are often replaced to give the hoaxes new life again. People cannot gain access to your Facebook just by adding them as a friend, or if you share mutual friends, as this current one suggests. Phew! (h/t Heavy, photo via Carl Court/Getty)

6. Quote of the day: “My point is, life is about balance. The good and the bad. The highs and the lows. The piña and the colada.” Ellen DeGeneres unintentionally gives us some #MondayMotivation AND a perfect nod to #PinaColadaDay.