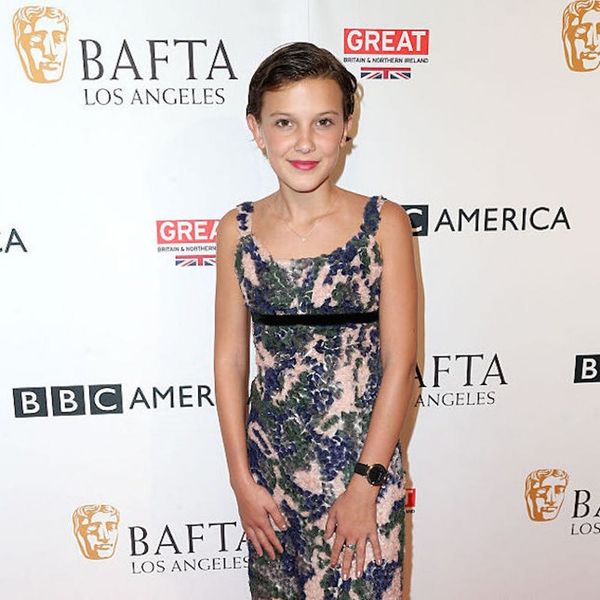 Netflix runaway hit Stranger Things has captured audiences in a way unlike any other show this summer. The show’s breakout stars, of course, are the kids who play the leading characters, and the lone girl “Eleven,” played by Brit actress Millie Bobby Brown, is clearly already a force to be reckoned with. When she’s not rapping Nicki Minaj lyrics on Fallon or appearing on the red carpet looking gorgeous beyond her 12 years, Millie is taking the words “grown up” to a whole different level and putting those of us who are technically adults to shame.

In an interview with W Magazine, the tween star talks candidly about her role in Stranger Things and what it meant to shave off her long, flowing hair, and her answer is surprisingly mature. “I wasn’t worried about my hair at all,” MBB declares in the interview. “I don’t care what I look like; it’s how people think of me. And I do care how people think of me. I want people to say, ‘Oh, she’s nice,’ rather than, ‘Oh, she’s so pretty.’ Yes, it’s hard for anybody to go through something like that (having her head shaved), but it’s harder for someone to go through a disease like alopecia or cancer, losing their hair without any choice.”

We for sure don’t know if we’d be able to be so cool and collected about having our hair shaved off, but we’re clearly nowhere near as mature as MBB. Besides becoming a breakout TV star, she’s also becoming a fashion darling, attending runway shows with costar Wynona Rider and rocking Valentino RED on the red carpet.

With Eleven’s fate on Stranger Things still TBD, one thing’s for sure — we definitely can’t get enough of the pint-sized starlet.

What would you do if you had to shave your head? Tell us @BritandCo!

Kat Armstrong
Kat has been a writer, social media maven and mom for longer than she's willing to admit. She's also spent time in front of and behind the camera, interviewing celebs, politicians and acting as a producer for fashion and artistic photography shoots. When she isn't writing for various orgs and publications, she's hanging with her kids, husband and French Bulldog, Peter, in Toronto, Canada.
Celebrity Style
Celebrity News
Celebrity Style
More From Celebrity News