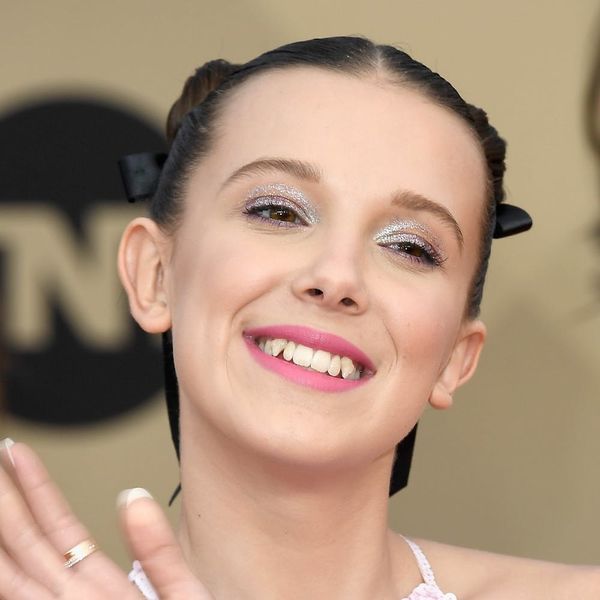 Having become a full-fledged fashion star at the ripe old age of 12 as the face of Calvin Klein By Appointment, there’s been much controversy as of late over *how* exactly the now 13-year-old should be dressing on the red carpet. Her Golden Globes look, for instance, had some balking at what they deemed to be a far-too “risqué” style for such a young woman. When it came to the SAG Awards however, Brown couldn’t have been more age-appropriate, bucking heels or boots for — get this! — a pair of Converse sneakers!

That’s right! The reigning queen of style expertly pulled off the same sneakers we regularly wear with our favorite jeans and tee combos with a gorgeous pink sequined Calvin Klein By Appointment mini-dress.

Not only did it totally suit the Stranger Things actress, it also managed to appear every bit as natural — if not more — than a pair of fancy sandals would.

As it turns out, the RL Eleven actually had another reason for choosing her footwear that had nothing to do with her age — She loves to dance! “You’ve got to go for Converse. You’ve got to dance the night away, win or lose!” she said during her carpet interview. “You know you gotta keep it stylish. It’s fun to go to the parties. I love to dance, that’s why I brought these.”

Though we think she looks amazing in just about anything, overall, this just may have been her best look yet.

What do you think of Millie’s shoe choice? Share with us over @BritandCo.

Nicole Briese
Nicole is the weekend editor for Brit + Co who loves bringing you all the latest buzz. When she's not busy typing away into the wee hours, you can usually find her canoodling with her fur babies, rooting around in a bookstore, or rocking out at a concert of some sort (Guns N' Roses forever!). Check out all her latest musings and past work at nicolebjean.com.
Celebrity Style
Red Carpet
Celebrity Style Red Carpet SAG Awards Shoes sneakers