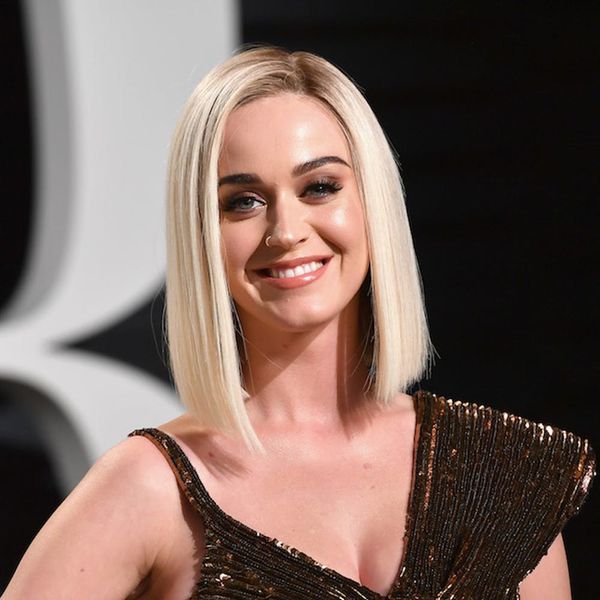 Katy Perry gets the breakup haircut of our dreams and Lena Dunham gets a *taboo* tattoo in this morning’s top news tidbits. Check those and more out below!

I WASNT READY TILL NOW

1. Katy Perry looks almost unrecognizable with her short new post-breakup ‘do. Only a day after we learned that Perry and Orlando Bloom would be taking a break, Katy posted two videos to her Instagram showing the Miley Cyrus-esque short (and still bleached blonde) cut, and her hairdresser can be heard saying that he’s wanted to give her that style since the day he met her. Katy wrote that she “wasn’t ready till now,” and girl, we know all about the drastic post-breakup haircut/travel/spending, so we feel that. Katy actually addressed her split from Orlando on Twitter, urging followers to consider “A NEW WAY OF THINKING FOR 2017!? U can still b friends & love ur former partners! No one’s a victim or a villain, get a life y’all!”

We are so excited to announce the birth of the newest member of the McDermott family! Please join us in welcoming Beau Dean McDermott. pic.twitter.com/xPCK25cBHV

2. Tori Spelling and Dean McDermott have a new son! That’ll be baby number five for the lovebirds, if you’re keeping count. Beau Dean McDermott was born at 1:48pm, weighing five pounds, 12 ounces, according to People. “We are over the moon in love with baby Beau,” Spelling said in a statement. “He is a true blessing and his brothers and sisters were overjoyed to meet him! We are all truly grateful for our big beautiful and healthy family.” Congrats to all on the new addition!

Thank you @trinegrimm for my warrior's chest plate/tit chandelier. This is my first original piece by a female tattoo artist and it felt sacred and cool and she didn't chide me for copying @badgalriri's placement. If you're ever in Oslo, go meet this metal queen and let her handle your body 🌖

3.Lena Dunham got a big and beautiful new tattoo in the same *risqué* spot as another celeb. Look familiar? Dunham’s new “warrior chest plate/tit chandelier” tattoo is in the same spot as Rihanna’s underboob ink, and it looks pretty awesome. “This is my first original piece by a female tattoo artist and it felt sacred and cool,” Dunham wrote. “And she didn’t chide me for copying @badgalriri‘s placement. If you’re ever in Oslo, go meet this metal queen and let her handle your body.” There’s enough underboob to go around, y’all.

4. Reports say that Vice President Mike Pence used a personal email for work when he was governor of Indiana and that it was once hacked.The Indianapolis Star has discovered that Pence’s AOL account was used to communicate with top advisors on topics ranging from FBI updates, the state’s terrorism response plans, and more. The address was hacked at one point, and an email was sent to Pence’s contacts trying to scam money for Pence and his wife who the hacker said were stranded in the Philippines. You may remember Pence’s fierce criticisms of Hillary Clinton for using a private email server while she was secretary of state, a topic that was revisited in the news just days before the 2016 election. (h/t Indianapolis Star, photo via Alex Wong/Getty)

5. Kylie Jenner is going full Kim Kardashian in this internet-breaking butt pic. We predicted that the youngest Jenner would come for the queen Kardashian’s throne in 2017, and it looks even more likely with this new pic that’s reminiscent of Kardashian’s famous Paper mag shoot. Of course, this one you can wear as official merch right from the Kylie Shop. Break the IRL?

6. Quote of the day: “This is the future that liberals want.” A line from a far-right Twitter user denouncing diversity immediately backfired and became a massive meme.

Do you have any big weekend plans? Let us in on the deets @BritandCo!