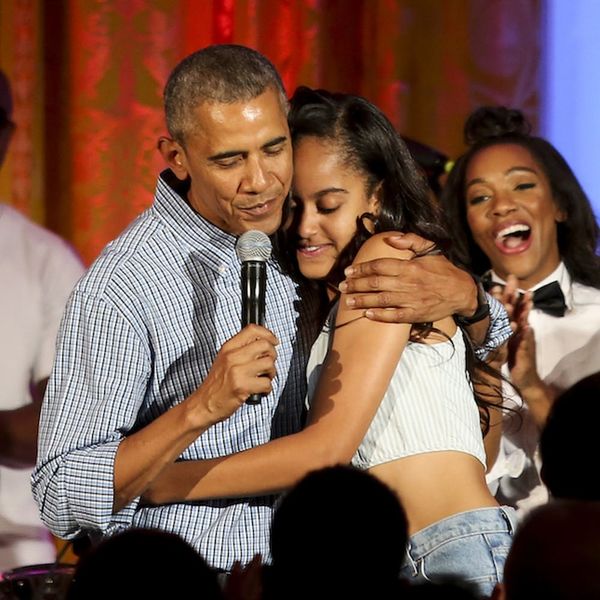 Happy Tuesday morning! If you’re still in a post-long-weekend haze, sit back and soak in more celeb holiday celebrations and other news items causing buzz today.

1. First, a quick moment of silence for President Obama’s last Fourth of July party as President. Sniff. For his last shindig, Obama called on Janelle Monae, Kendrick Lamar and more to help celebrate the country’s independence, but the Fourth also happens to be his oldest daughter Malia’s birthday, so he did what any appropriately embarrassing dad would do and serenaded her in front of all the guests. “And just because it’s a job of a father to embarrass his daughters, I’ve got one last job,” he said at the end of his speech. “It just so happens that we celebrate our country’s birthday on the same day that we celebrate my oldest daughter’s birthday.” He then launched into it with everything he had. She came up and gave him a giant hug afterward.

2. Taylor Swift loves America more than ANYONE. You know by now that Taylor Swift had the beach party of all beach parties to celebrate the fourth of July weekend, featuring Tom Hiddleston’s tank top and some adorable beach cuddles from Blake Lively and Ryan Reynolds. The bash carried into Monday, with an epic fireworks display for the #squad at the end of the evening. “Happy 4th from us,” Taylor posted on Instagram, showing the usual cast of besties — Cara Delevingne, Gigi Hadid, Este Haim, Blake Lively — along with Orange Is the New Black‘s Uzo Aduba and Ruby Rose draped in stars and stripes, with fireworks going off in the background. Literally picture perfect.

3. But Tay’s party was missing one key person: Where was Selena?! Taylor’s OG #squad member was far away from Rhode Island for the weekend, all the way in Arizona where her Revival tour was set to touch down. Selena made her own fun, hanging with her tour crew at… a gas station? Whatever it takes to get over the FOMO!

4. Ice Cream Books is your new favorite Instagram account for summer. What’s better in summertime than ice cream and a good read? While the photos on this beautiful Instagram account might make the clean-freak side of you cringe, they’re also mesmerizing. Summer forever! (h/t Mashable)

5. This dog is NOT here for you to be on your phone all day. Watch as the delightful pup steals a man’s phone and refuses to give it back. Aren’t we all just looking for a little attention?

6. Quote of the day: “[Her people] wanted to arrange a meeting and all that stuff, and I said, ‘Look, I’m with her and I don’t need anything for it.'” Oprah Winfrey on her unbiased endorsement of Hillary Clinton.

Did your holiday weekend resemble Taylor’s or Selena’s? Let us know at @BritandCo!