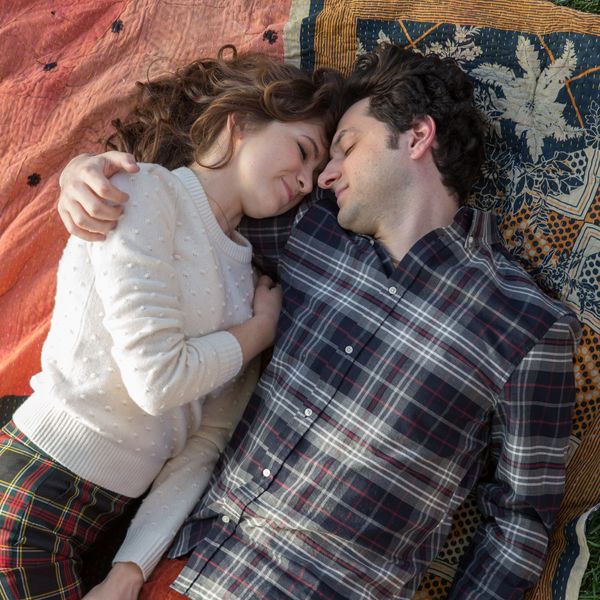 Fall is the perfect time to queue up a cozy movie marathon. The days are getting shorter and colder, and luckily for us, at-home entertainment options are better than ever. With Netflix's increasingly solid catalogue of original films, there's no shortage of picks that'll have you in your feelings on the couch. Here are 10 Netflix originals to save to your list for the coziest fall movie marathon. (Photos via Netflix)
Happy Anniversary (2018): In this somewhat melancholy rom-com, Sam and Mollie spend their three-year anniversary coming to terms with their faltering relationship. The story is told through flashbacks of their better — and worse — times over the course of the single, supposed-to-be-celebratory day, as they decide whether to stay together or break up. It's painfully relatable, even if you haven't been in this exact situation, and perfect for a reflective night at home alone. (Photo via Robb Rosenfeld/Netflix)
Kodachrome (2018): Ed Harris and Jason Sudeikis play an estranged father and son who embark on a road trip to get four old rolls of Kodachrome film developed in the last lab that does it — and before Harris' character dies. Elizabeth Olsen is along for the ride, too, as Harris' nurse and the resident peacekeeper — and, ultimately, a father-son relationship fixer. (Photo via Christos Kalohoridis/Netflix)
Step Sisters (2018): When you're ready for a break from all the feelings, Step Sisters is the perfect Bring It On-esque pick-me-up. Jamilah is an ambitious and talented college student who is tasked with trying to repair her school's reputation by teaching the sorority sisters who wrecked it how to step. (Photo via Daniel McFadden/Netflix)
The Guernsey Literary and Potato Peel Society (2018): Netflix hit its stride with rom-coms in 2018, and while this period piece is decidedly more romance than comedy, it's a worthy watch on the streaming giant. Set in 1946 London, the film (based on the book of the same name) follows Juliet (Lily James), a writer who receives a letter from a member of a literary club started in Nazi-occupied Guernsey. She decides to visit, and once there she meets the characters of this mysterious literary society, including Dawsey (Michiel Huisman), the man behind the letter. (Photo via Kerry Brown/Netflix)
Candy Jar (2018): Lona and Benne are the only two students on their elite high school's debate team, but they've had a bitter rivalry since childhood. When they realize they'll have a better shot at getting into their dream schools if they team up and work together, they realize they might have more in common than they thought. Christina Hendricks, Uzo Aduba, and Helen Hunt also star. (Photo via Curtis Baker/Netflix)
Nappily Ever After (2018): Sanaa Lathan stars as Violet, a woman who seemingly has it all — a high-powered job, a boyfriend who's also a successful doctor, and a perfectly put-together appearance. But when she starts to feel like she's losing her grip, she does the unthinkable, shaving her hair in order to free herself of expectations, and of her need to control everything around her. Save this one for when you need an emotional, empowering pick-me-up. (Photo via Tina Rowden/Netflix)
Our Souls at Night (2017): Our Souls at Night follows neighbors Addie (Jane Fonda) and Louis (Robert Redford), a widow and widower, respectively, as they bond over their shared sense of loss. It's based on the best-selling Kent Haruf novel and made for the small screen by the same team behind The Fault In Our Stars, so you know it's going to be a sweet watch. (Photo via Kerry Brown/Netflix)
#realityhigh (2017): A modern teen comedy is the perfect addition to any easy-viewing movie marathon. While few movies touch the perfection of the '90s classic Clueless, #realityhigh is a fun cousin (if in aesthetics alone), about an over-achieving high school student named Dani who competes for the attention of her crush against his social-media famous ex. (Photo via Bruce Finn/Netflix)
XOXO (2016): Sarah Hyland, Graham Phillips, Hayley Kiyoko, Ione Skye, Chris D'Elia, and more star in this adventurous ensemble comedy about strangers whose lives collide as they race to see their favorite DJ at a music festival. Because sometimes, even if fall is the best season, you still just wish it were summer. (Photo via Sara Swaty Roger/Netflix)
The Little Prince (2015): For a whimsical feel-good addition to a feelings-heavy movie marathon, why not escape in this gorgeous animated take on Antoine de Saint-Exupery's beloved classic story? The voice talents on board include Rachel McAdams, Marion Cotillard, Benicio Del Toro, Paul Giamatti, and more. (Photo via Netflix)
Nicole Villeneuve
Nicole is an entertainment and lifestyle writer covering pop culture, news, and cool women doing cool things. She likes yard sales, MTV's Teen Mom, and putting too many memes in the group chat. She lives in Toronto.
#CreateGood 2018
Streaming
#CreateGood 2018 Movies Netflix