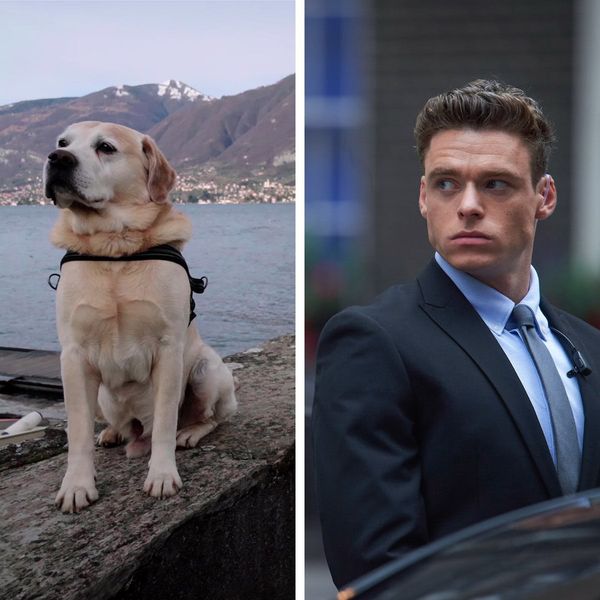 The Thanksgiving holiday is the perfect time to catch up on your Netflix queue. We could spend as much time scrolling through the seemingly endless options as we do actually watching something, though, so to make it easier, we've compiled some recommendations of the streaming service's most promising new releases, as well as some older titles that might be worth revisiting. (Photos via Netflix)
The Holiday Calendar: Thanksgiving is the unofficial kickoff to Christmas, so why not use the holiday weekend to settle into some seasonal rom-coms? Start with The Holiday Calendar, one of several original Christmas flicks debuting on Netflix this year after the success of last year's A Christmas Prince. The Holiday Calendar stars Kat Graham as a photographer who discovers an antique advent calendar with seemingly magical properties. (Photo via Netflix)
The Princess Switch: When you're done with The Holiday Calendar, hit play on The Princess Switch, another original holiday rom-com. This one features Vanessa Hudgens pulling double-duty as both Chicago baker Stacy and Lady Margaret, the Duchess of Montenaro. When the royal family of Belgravia invites Stacy to take part in a prestigious Christmas competition, she and the Duchess realize they look identical and decide to temporarily trade lives. (Photo via Gabriel Hennessey/Netflix)
The Great British Baking Show, Collection 6: The latest episodes of everyone's favorite British bake-off are finally here! Collection 6, which aired as season 9 in the UK earlier this year, hit the streaming service earlier this month, and the feel-good, friendly competition is exactly what the long Thanksgiving weekend calls for. (Photo via Netflix)
Dogs: Would you like to cry a lot of happy tears over the Thanksgiving break? Good, because Netflix has just released a six-part documentary series about dogs, their owners, and all the ways these four-legged wonders are human's best friend. (Photo via Netfllix)
She-Ra and the Princesses of Power: Whether you're looking to revisit your childhood or checking out the adaptation of the '80s cartoon classic for the first time, She-Ra is a fun and feisty watch that'll leave you feeling inspired and empowered. (Photo via Netflix)
The Christmas Chronicles: If you find yourself spending time with lots of younger relatives over the holiday, this is a perfect film to put on for the whole family. Kurt Russell plays Santa Claus, whose Christmas Eve plans are thrown for a major loop when a brother and sister attempt to catch the man in red — only to accidentally crash his sleigh in the process. Now, they have to hurry up and save Christmas before it’s too late. (Photo via Michael Gibson/Netflix)
Bodyguard: If you're looking for a break from rom-coms and feel-good fluff, Netflix also has a buzz-worthy new drama for you to binge-watch over Thanksgiving. Richard Madden stars as David Budd, a military veteran who is hired as a bodyguard for controversial politician Julia Montague (Keeley Hawes). The pair navigate rocky early ground as David is also dealing with PTSD and a dissolving marriage. (Photo via Sophie Mutevelian/World Productions/Netflix)
Shirkers: If you're in the mood for a human interest and culture mystery, this film-festival favorite documentary is a must-watch. In 1992, a group of teenage friends in Singapore made a film that could have been a cult classic — if the footage hadn't been stolen by their American collaborator, Georges Cardona. Years later, the filmmakers look for answers, reliving their lost youth in the process. (Photo via Netflix)
A Christmas Prince: After the huge success of this original Christmas movie last year, Netflix will release the sequel, A Christmas Prince: The Royal Wedding, on November 30 — which gives you lots of time over Thanksgiving weekend to rewatch the first one 18 times. No judgment here. (Photo via Netflix)
Barry: With the recent release of Michelle Obama's new memoir Becoming, it's the perfect time to revisit this 2016 depiction of the years that led up to Barack Obama's political career. Devon Terrell plays a young Obama during his time at Columbia University in the early '80s. (Photo via Linda Kallerus/Netflix)
What Happened to Monday: Given how good Netflix's original films have been over the past year, it's fun to scroll back through previous releases to see what you might have missed. This 2017 action drama stars Glenn Close, Noomi Rapace, and Willem Dafoe as members of a family who have broken the government's strict one-child rule and must avoid being found out while tracking down one of the seven sisters. (Photo via Netflix)
Elite: This under-the-radar Spanish-language teen crime drama became a word-of-mouth hit almost as soon as it arrived on Netflix, so catch up now before season 2 arrives. It's a little like Gossip Girl meets Pretty Little Liars, plus class and sexuality studies, with a murder mystery thrown in for extra intrigue. (Photo via Manuel Fernandez-Valdes/Netflix)
Easy: You can binge both seasons of this star-studded anthology series, but the episodes work as stand-alones too, so it's a fun one to dip in and out of if you're looking for some mini distractions over Thanksgiving. The show follows various Chicago characters dealing with typical life and relationship challenges. Look for Orlando Bloom, Zazie Beetz, Malin Akerman, Jake Johnson, Dave Franco, Emily Ratajkowski, Elizabeth Reaser, and many more. (Photo via Netflix)
Nicole Villeneuve
Nicole is an entertainment and lifestyle writer covering pop culture, news, and cool women doing cool things. She likes yard sales, MTV's Teen Mom, and putting too many memes in the group chat. She lives in Toronto.
Movies
Streaming
Movies Netflix TV
More From Streaming