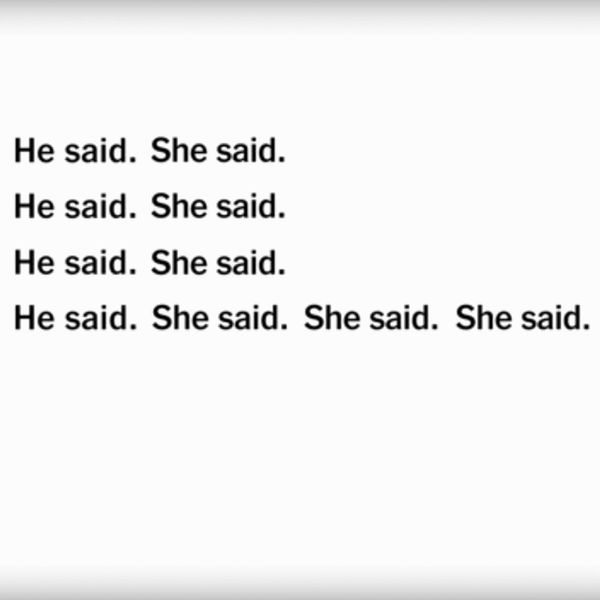 Taking a cue from actresses who are using the 2018 Golden Globes to speak out about the Time’s Up initiative and to amplify the voices of activists, The New York Times decided to release a commercial during the big event that shows their support of the #MeToo movement and reminds us of the power of the truth.

The video — aptly titled “The Truth Has a Voice” — debuted online a few days ahead of the awards show, and while it’s incredibly simple, it’s also incredibly moving.

At the beginning of the ad, on a stark white background, black text spells out, “He said,” followed by, “She said.” The words then repeat themselves a few times, mimicking the way sexual harassment, abuse, and denial has permeated the industry for years.

After the fourth “He said,” though, the words “She said” appear again and again in rapid succession, as the background music swells to a climax, mirroring the growing chorus of voices who have spoken out against harassment in Hollywood.

The NYT released a statement about the commercial on Friday, saying it’s just the beginning of the next phase of their campaign that will focus on “original, independent journalism that holds power to account.”

It was the Times that first published allegations against Hollywood heavyweight Harvey Weinstein back in October. Though Weinstein’s attorney, Charles J. Harder, said the article about his client was “saturated with false and defamatory statements,” the paper has stood by their reporting.

And from the looks of their continuing campaign, it seems like they have no intention of backing down.

What do you think about the New York Times’ “The Truth Has a Voice” commercial? Let us know @BritandCo!

Desiree O
Desirée O is a ‘Professional Bohemian’ who loves anything and everything related to the arts, entertainment, and pop culture. She ADORES being a ‘Newsy’ for Brit + Co, covering all of the latest tidbits of awesomeness that you want to read about. When she’s not writing, she’s either making messy art, going on long adventurous walks with her camera, or poking around over at bohemianizm (http://www.bohemianizm.com/). You can find out about Desirée O and her work at http://DesireeO.com/ or follow her on Twitter @DesireeO.
Golden Globes
Current Events
Golden Globes