10 Non-Disney Theme Parks Worth a Visit 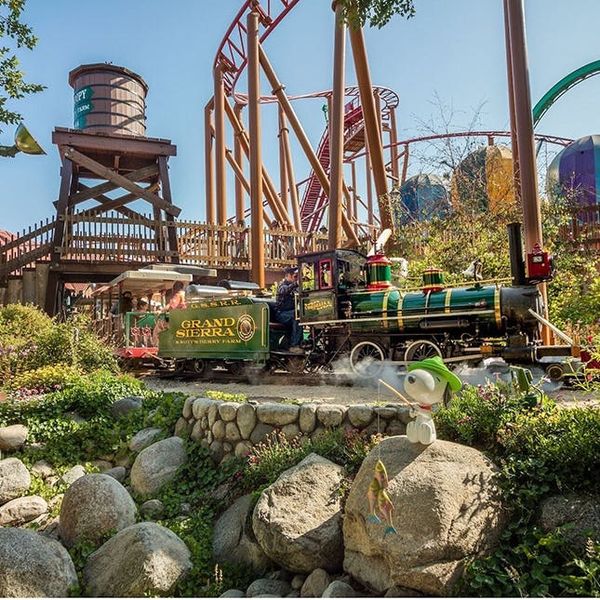 As you might have noticed, we are all in when it comes to an epic visit to Disneyland or Disney World. But on occasion, we feel like exploring the world outside of Minnie and Mickey. While Disney Parks around the world tend to be the most popular destinations for those looking for action and adventure, there are others out there waiting to amuse us with their rides, attractions, and experiences. We’ve got nine amusement parks found all over the world that are worth a visit (or two or three...).
Universal Parks and Resorts, Orlando, FL and Hollywood, CA: Disney’s biggest competitor is, without a doubt, Universal Parks and Resorts. With parks in Hollywood, Orlando, Japan, and Singapore, Universal has scored huge crowds with their wildly popular Wizarding World of Harry Potter. Along with casting spells in Diagon Allery and taking a selfie in front of Hogwarts, there are heaps of other activities at these parks such as hanging out with the Simpsons, delving into the world of Dr. Seuss, and getting wet and wild in Universal’s Volcano Bay. (Photo via Universal Parks and Resorts)
Hersheypark, Hersey, PA: This is a sweet option for your theme park fix — literally. Get a photo with a walking chocolate bar, go on a chocolate tour, or dare to ride one of the huge roller coasters at Hersey Park (with chocolate touches, of course). Along with all the rides and desserts, there’s also a spa, a zoo, gardens, and a car museum. There really is something for everyone! (Photo via Hersheypark)
Evermore, Pleasant Grove, UT: The newest entry into the world of theme parks is the high-concept Evermore. There are no rides at Evermore; instead, it's just immersive storytelling. (Evermore aptly calls itself an “experience park.") Guests wander the European-style village, interact with a cast of characters, and engage in a quest. The seasons — Lore (Celtic-themed), Aurora (Dickensian-themed), and Mythos (Norse-themed) — rotate throughout the year. They also host themed parties such as the Ghost Pirate Adventure or the Masquerade Ball where everyone is encouraged to dress the part and join in on the fun. (Photo via Evermore)
Knott's Berry Farm, Buena Park, CA: This quaint theme park's origins harken way back in the 1920s, when it was roadside stop for selling berries, jams, and pies. After the success of Mrs. Knott's Chicken Dinner Restaurant, the Knott family added a western-themed town, and their amusement park was born. Even with the addition of roller coasters, dark rides, and the Peanuts gang, the berry goods, fried chicken, and even the ghost town still are the backbone of this Orange County park. (Photo via Knott's Berry Farm)
Europa Park, Rust, Germany: Nestled between the Black Forest and the Vosges mountains, Europa Park is the second-most visited theme park in Europe (right after Disneyland Paris). This park runs deep with European pride, including a roller coast called the Can Can hidden in a replica of Moulin Rouge and odes to classic European fairytales from Sleeping Beauty to Rapunzel. Their hotel game is strong too: Visitors can stay at Hotel Bell Rock (a New England-themed hotel), Castillo Alcazar (a Middle Ages-themed castle), and Krønasår - The Museum-Hotel (which will open later in 2019). (Photo via Europa Park)
Le Puy du Fou, Les Epesses, Vendée, France: Located in the serene Vendée region of Western France, Le Puy du Fou is a theme park that celebrates history. The focus of the park is not physical rides but rather flights of the imagination: It presents 26 different shows that touch upon the lore of the Vikings, the Romans, and those living large in the Renaissance. They’ve also created four carefully curated period villages paying homage to different times in history. The accommodations at the park are also historically themed, with the chance to sleep in Henry VIII-era tents or in the rustic rooms of La Citadelle, a medieval-themed village complete with a medicinal herb garden and knights standing guard. (Photo via Puy du Fou)
Dollywood, Pigeon Forge, Tennessee: You might come from the thrill rides, but you stay for the old-school crafts, the music of the Smoky Mountains, and to bask in the glow of the one and only Dolly Parton. The park celebrates the rich culture of the area with attractions like the Rebel Railroad, a replica of Dolly's Tennessee Mountain Home, and an opportunity to watch candle makers, woodworkers, and potters create treasures you can take home. To get the full experience, you can stay in one of the homey wood cabins nearby. (Photos via Dollywood)
Tivoli Gardens, Copenhagen, Denmark: The legendary Tivoli Gardens began entertaining the masses in 1843, so they possess a whole lot of Old World charm and beauty. Along with thrill rides like Fatamorgana, Vertigo, and The Star Flyer, there’s the charming Pantomime Theatre, restaurants serving up gourmet goodies, and stunning grounds featuring exotic architecture and even pirate ships. (Photo via Tivoli Gardens)
Efteling, Kaatsheuvel, Netherlands: The Efteling aesthetics is deeply steeped in myths, legends, fairy tales, and folklore. Dragons, fairies, and gnomes are sprinkled around a park that includes a giant wooden roller coaster, an old-school carousel, and spinning cauldrons. Their hotels included themed suites inspired by Snow White, Hansel and Gretel, and the Flying Dutchman. (Photo via Efteling)
Cedar Point, Sandusky, Ohio: If you’re looking for the thrill of multiple roller coasters, Cedar Point is the place to go. Among their 70 rides, they have 18 — yes, 18 — roller coasters. After all that screaming, guests can take a break on their private mile-long beach or head to one of their more low key attractions. This summer they’ll introduce Forbidden Frontier on Adventure Island, an immersive, live-action experience that includes mind-challenging activities and interactive elements for the entire family. (Photo via Cedar Point)

RELATED: 7 Places Every Disney Fan Needs to Visit (Besides Disneyland)

RELATED: 7 Places Every Disney Fan Needs to Visit (Besides Disneyland)

Sunny Chanel
Sunny Chanel is a freelance writer as well as the founder of the whimsical site Wonder and Company. When this proud San Franciscan isn't writing, working on her fixer-upper or doing crafts, she is playing dress up with daughter and planning her next trip to Disneyland.
Best Places to Travel
Travel
Best Places to Travel Travel Vacation