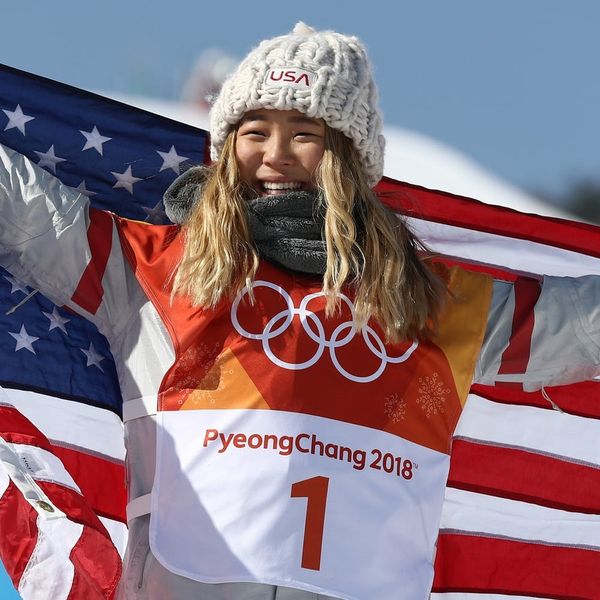 Chloe Kim has become America’s Sweetheart. Her pre-gold medal-winning run tweets are already legendary, and her relationship with her dad is one of the most wholesome and perfect parent-child bonds we’ve ever seen. But even 17-year-old Olympians aren’t immune to body harassment, as was evidenced by Sirius XM and San Fransisco radio host Patrick Connor, whose remarks about Kim’s body got him fired from his morning radio show.

“Her 18th birthday is April 23,” Connor said on the second episode of the Sirius XM show that he co-hosts, Dialed-In with Dallas Braden. “And the countdown is on, baby, cause I got my Wooderson going — ‘That’s what I like about these high school girls.'” The “Wooderson” he mentions is Matthew McConaughey’s infamous Dazed and Confused character that birthed the famous “alright, alright, alright, alright,” that’s followed the actor since.

While his co-host yelled, “no!” in an attempt to get Connor to slow down, the DJ continued. “She’s fine as hell! If she was 18, you wouldn’t be ashamed to say that she’s a little hot piece of ass. And she is. She is adorable, I’m a huge Chloe Kim fan.” Connor was fired from his Bay-area morning show, The Shower Hour with Patrick Connor on Wednesday.

Yesterday in a weird attempt to make people laugh I failed. My comments about @chloekimsnow were more than inappropriate they were lame & gross. Im truly sorry Chloe. You’ve repped our country so brilliantly. I apologize to my colleagues & the listeners for being a total idiot.

Connor rapidly apologized on Twitter, saying the remarks were his attempt at a joke. “Yesterday in a weird attempt to make people laugh I failed,” he tweeted. “My comments about @chloekimsnow were more than inappropriate they were lame & gross. Im truly sorry Chloe. You’ve repped our country so brilliantly. I apologize to my colleagues & the listeners for being a total idiot.”

Interestingly, when one of Connor’s Twitter followers replied to his apology with, “it took you a day to figure that out?” Connor’s response was sincere, and the right one to make:

“Well admittedly I hadn’t given any thought to what I said until the deadspin thing & my first reaction was to get defensive. Then I began to think about it & came to a sincere conclusion that I was way way out of bounds & wrong.” (Deadspin first broke the story.)

Connor’s firing, and the backlash he received in discussing Kim’s body, give us yet another reminder that discussing women’s bodies is never appropriate unless the woman herself brings it up. And young women’s bodies, especially teenage minors, should remain ultra off-limits, even if someone is attempting a joke — a lesson the radio host clearly learned the hard way.

Do you listen to sports radio? Let us know @BritandCo!