Peeps Oreos Have Returned for 2018 With 2 MAJOR Differences 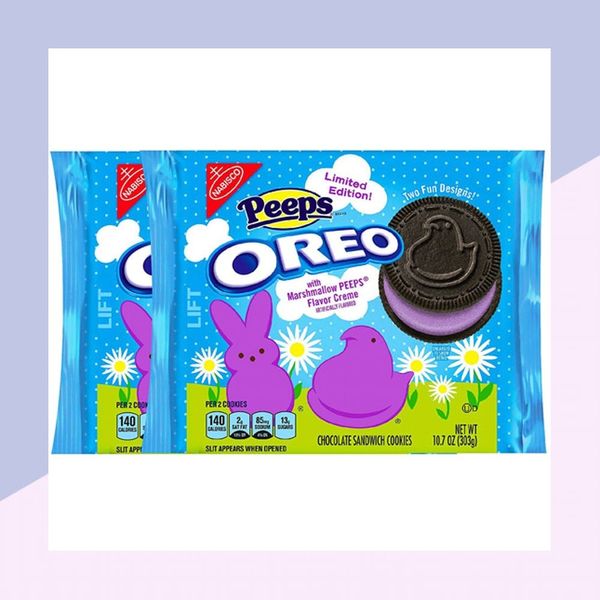 As Le Creuset gears up for St. Patrick’s Day with a limited-edition clover-shaped Dutch oven, Oreos is skipping ahead even further, prepping for Easter with the return of its now infamous Peeps Oreos.

That’s right! The marshmallow flavored treat the company introduced in spring of last year are back for a second run — but with a twist.

If you noticed that these cookies look a *little * different than last year’s model, you’re definitely not wrong: Gone is the fuchsia, Red 3 filling that had fans experiencing a most unexpected side effect after consumption — most notably, turning people’s fecal matter bright pink (yes, really!).

Instead, they’re playing it safe with a pretty, lilac-hued version of the filling, which, according to Instagram account @candyhunting, is also less “bitter” tasting.

Also missing from this year’s variety are the golden vanilla wafers that made up the cookie’s exterior, replaced instead by the brand’s signature chocolate cookie toppers.

Finally found them!!! If you also had no luck finding the Peeps Oreos at CVS, Walmart now has them stocked! Additionally, this year's version does not contain Red 3, which means no horrificly bitter aftertaste.

From the sounds of the tweets that are coming in, these sound like a SERIOUS upgrade.

I don't like Peeps but there's something about these Oreos. This pack may not survive the night. pic.twitter.com/QjrAkWXAgg

i’m not a fan of peeps but the peeps oreos are the shit.

You can snag them in limited stock online ($20), or, as @candyhunting noted, on the shelves of your local Walmart.

Will you be partaking in Oreo’s Peeps? Share over @BritandCo.

Nicole Briese
Nicole is the weekend editor for Brit + Co who loves bringing you all the latest buzz. When she's not busy typing away into the wee hours, you can usually find her canoodling with her fur babies, rooting around in a bookstore, or rocking out at a concert of some sort (Guns N' Roses forever!). Check out all her latest musings and past work at nicolebjean.com.
Grocery Shopping
Food News
Grocery Shopping New Food Alert Snacks
The Conversation