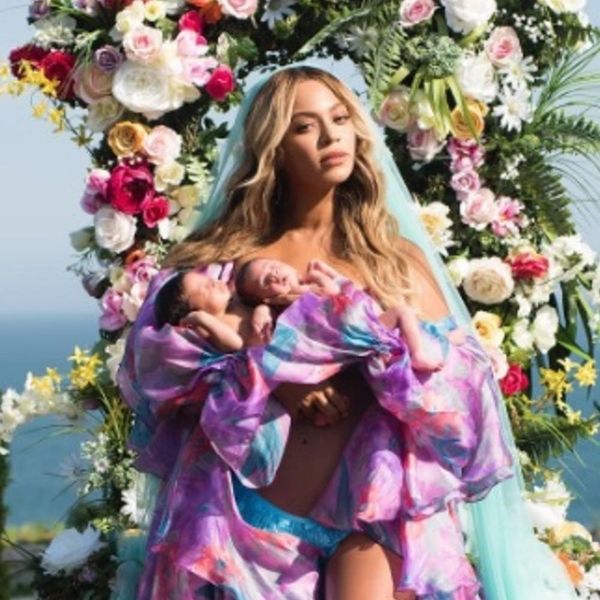 Today was the day so many Beyoncé fans have been waiting for: Mama Bey herself introduced her twins to the world, not only sharing a gorgeous new pic (which is a stunning mirror-image of her internet-breaking baby bump pic), but also confirming the names of her two little bundles of joy. However, in doing so, she sparked some serious confusion.

The two newest members of Beyoncé’s family have monikers that are just as unique as anyone would have expected (their big sister *is* named Blue after all). However, the way in which Bey decided to write the twin’s names in her caption — “Sir Carter and Rumi 1 month today. 🙏🏽❤️👨🏽👩🏽👧🏽👶🏾👶🏾” — has left plenty of people scratching their heads and asking for a little clarification.

Forgive me I went to sleep. pic.twitter.com/744SAklF91

So wait is one of #beyoncetwins named Sir Carter Carter? Someone please help

LISTEN Y'ALL, SHE SPECIFICALLY PUT SIR CARTER AND RUMI, NOT SIR AND RUMI CARTER. WE WILL REFER TO KING #1 BY HIS COMPLETE NAME, SIR CARTER pic.twitter.com/37bgVVzHWI

And a few are wondering about little Rumi…

So will it be Sir Carter and Rumi Knowles?? Does Rumi not get a last name? Who knows! #beyoncetwins

Thankfully, Bey’s mom, Tina Lawson, has an answer to that last question.

Sharing Bey’s stunning pic with her own followers, she added the caption, “So Happy my baby shared a photo of her babies with the world ❤️❤️❤️proud grandma hello Sir Carter and Rumi Carter❤️🙏🏾❤️ 7/13/2017 Boy and girl what a blessing ❤️.”

There we go: Sir Carter and Rumi Carter. Welcome to the world, little Carters!

What do you think about the names Sir and Rumi? Let us know @BritandCo!