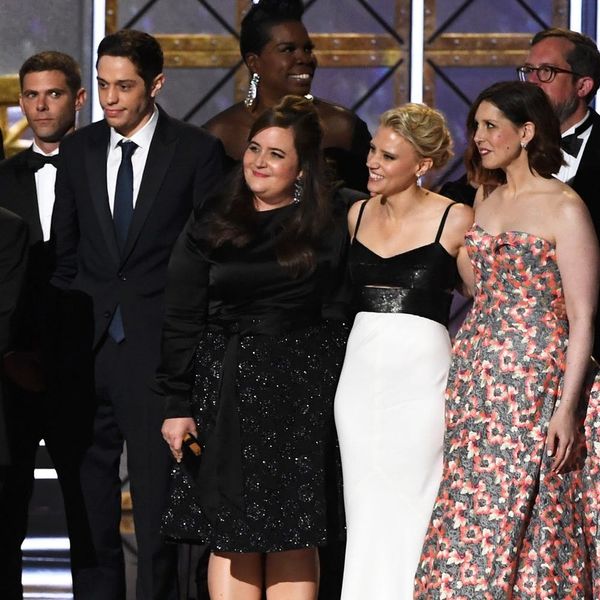 All year long, SNL has been gifting us with their hilarious renditions of political figureheads, from Alec Baldwin and Kate McKinnon’s now-iconic impressions of President Trump and Hillary Clinton to Melissa McCarthy’s Emmy-winning role as former Press Secretary Sean Spicer. Now, an SNL cast member is paying homage to the one of the show’s main sources of inspiration with a sizeable tattoo of Hillary Clinton’s likeness, and it’s not the one you might expect.

Though McKinnon has practically become synonymous with her role as the former Presidential hopeful, it was 24-year-old Pete Davidson, who joined SNL back in 2014 and was an outspoken supporter of Clinton throughout the last presidential election, that took to Instagram to show off his new ink, setting up an account just so he could share the post (his very first!) with his now 450k followers — and counting.

Opting for a photo of 67th US Secretary of State in her signature pantsuit, the young comedian also made sure to include her instantly recognizable bob, writing, “Wanted to get @hillaryclinton a Christmas gift, so I got a tattoo of my hero. Thanks for being such a badass and one of the strongest people in the universe.”

Clinton, for her part, was flattered, taking to the comments section to give the tattoo her seal of approval.

“Thanks, @petedavidson,” joking, “This makes it significantly less awkward that I’ve had a Pete Davidson tattoo for years,” But seriously, I’m honored. Merry Christmas my friend.”

Would you ever get a celebrity portrait tattoo? Tweet us @BritandCo.