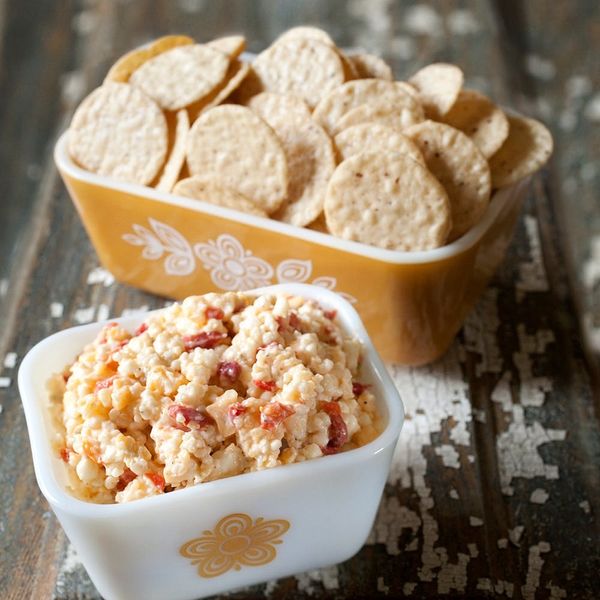 After the last of your holiday leftovers are gone and the food coma has worn off, you’re no doubt going to get hungry again. As you peruse the aisles at your local Trader Joe’s in the new year, cheese lovers will be psyched to discover three new cheese offerings, including pimento cheese, a twist on the brand’s Unexpected Cheddar, and a new Manchego blend.

In the December 17 episode of the Inside Trader Joe’s podcast, hosts Tara Miller (TJ’s director of words and phrases and clauses) and Matt Sloan (TJ’s vice president of marketing) gave some tidbits about what new products will be hitting the shelves in 2019, revealing that three new cheese options are on the way.

Miller announced that pimento cheese is on its way. He added, “If you’re from the American South, you definitely know what pimento cheese is, but I think a lot of other people don’t.” Sloan chimed in, “Why isn’t pimento cheese a thing everywhere?” Traditional pimento blends canned pimento pepper slices (similar to what’s stuffed inside olives), shredded cheddar cheese, and mayonnaise. It’s a sandwich staple, like tuna fish, but it’s also served as a casual appetizer or snack with crackers.

Also on the cheesy line-up, Miller told podcast listeners that she’s “really excited” about the forthcoming shredded version of Unexpected Cheddar. Sloan went on to share that a new Manchego blend from La Mancha, Spain, will hit shelves in April. He said it will be a cave-aged cheese that blends cow, sheep, and goat’s milk and is aged for nine months.

Are you excited for the cheesy new offerings at Trader Joe’s? Let us know on Twitter.

Arielle Tschinkel
Arielle Tschinkel is a pop culture junkie who went to NYU because the Olsen twins went to NYU (really). She is a freelance writer whose work has also been featured on HelloGiggles, Refinery29, SheKnows, Bustle, Hollywood.com, and many others; and she's living her dream one Britney Spears GIF at a time. Follow her on Twitter @mrstschinkel or visit her website at arielletschinkel.com.
Grocery Shopping
Food News
Grocery Shopping New Food Alert
The Conversation