The Secret to These Veggie Burgers Is… Plant Blood?! 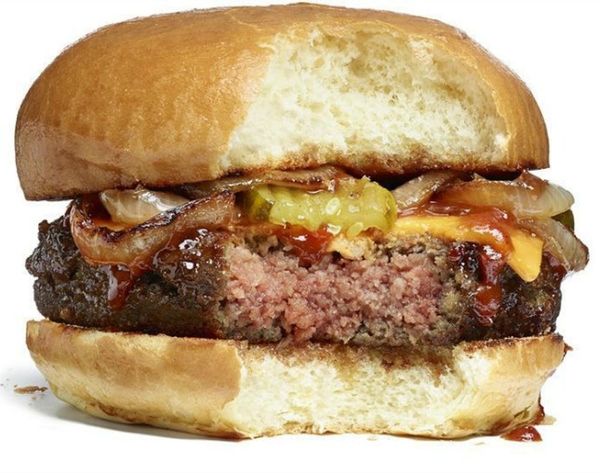 We promise this isn’t out of a horror film, at least for us humans. For plants on the other hand, it might be a different story. Scientists have figured out how to make a veggie burger that tastes like meat, and the secret is a compound called, perhaps slightly unappetizingly, plant blood.

Before you scream and run away, hear us out in the name of science. Heme, part of the iron compound hemoglobin found in human and animal blood, can also be synthesized from plant matter. Impossible Foods, a food alternative startup backed by Bill Gates, has partnered with scientists from Stanford to figure out how the heme compound from plants can be turned into delicious meatless burgers like these.

The burgers, which have no cholesterol and replicate meat that’s 80% lean, 20% fat (one of the richer options out there), supposedly imitate the taste and texture of your favorite patty, without any of the guilt over eating an animal.

Now, if you’re already a vegetarian because eating meat grosses you out, this might not be the best product for you. But for those of us who want to be a bit healthier or are trying to cut back on meat consumption, this could be a seriously viable option. And while they’re expensive now (costing about $40 to produce one burger), once mass production starts the prices should drop.

Finally, the most important question: do they really taste and feel like a hamburger? According to one taste tester, the texture is spot on. The taste is less so, evoking ground turkey more than a juicy beef patty. If it’s the latter you’re craving, you might not be fully satisfied. But if you’re willing to try something new, we say go for these meaty veggie burgers and tell us how they taste.

Would you eat one of these meatless burgers? Tell us in the comments below!

Nora Landis-Shack
Nora is a writer, photographer, foodie and feminist. After living in New York City for 23 years, she recently moved San Francisco and can't wait to explore. When she's not pursuing her interests in health and technology, she loves hiking, yoga, playing piano and squealing over kittens as an ASPCA volunteer.
plants
Recipes
plants
The Conversation
Reviews:
More From Recipes