Pregnant Beyoncé Is Our Velvet Crush in This Minidress 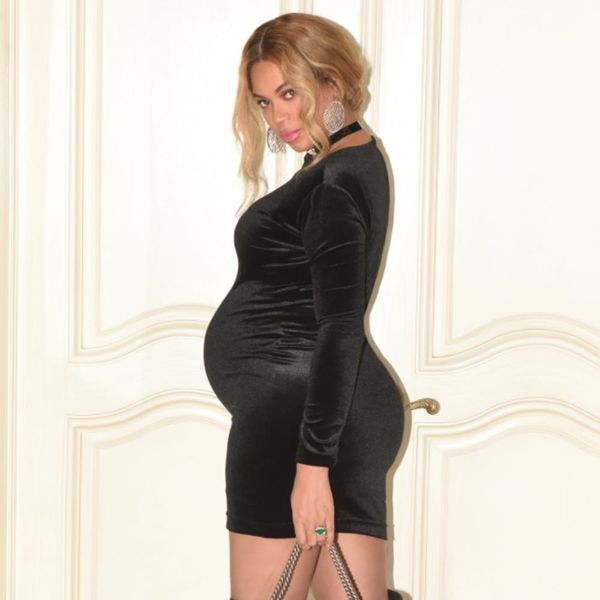 Since breaking the internet and announcing that she was pregnant with twins, Beyoncé has held everyone’s attention whenever she shows off another perfect maternity look (although TBH, she did that pre-pregnancy too). Most recently, folks are in a tizzy over the figure-fitting velvet dress she wore to her stepfather Richard Lawson’s 70th birthday party (pics were shared on her website).

Beyoncé is wearing the If I Were a Boy earrings again…

does this mean she's having twin boys?? pic.twitter.com/CxEgQ8wxCb

An eagle-eyed Twitter user ID’d the baubles as the same silver statement earrings that she wore in her “If I Were a Boy” video from the I Am… Sasha Fierce album released in 2008. Of course, she could just be rewearing pieces from her wardrobe occasionally like any other person, but… she’s also Beyoncé, Queen of cryptic Instagram messages (lol) who loves to surprise the Beyhive by dropping groundbreaking albums without any fanfare.

While we wait with bated breath until the twins are born to know one way or the other, just rewatch the video below and keep appreciating her velvet minidress.

What do you think of Beyoncé’s maternity style? Tell us over @BritandCo!

Channing Hargrove
Channing Hargrove is a freelance fashion editor and writer in New York City. When she isn’t writing about clothing (or shopping, for research, of course), Channing is writing about life in a tiny studio apartment in a big city — and what she’s wearing — on her blog, Channing in the City.
Beyonce
Celeb Style
Beyonce Celebrity Style maternity twitter
More From Celeb Style