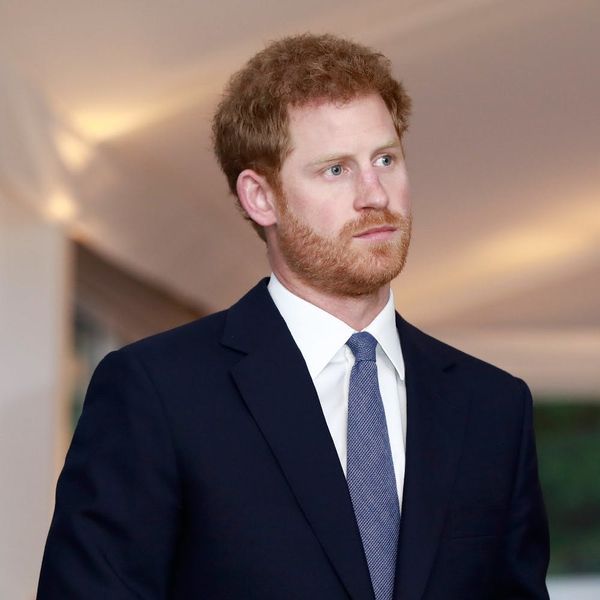 Prince Harry may be basking in the love of his bae (and soon-to-be fiancée?), Meghan Markle, these days, but it turns out that showing affection may be somewhat unfamiliar territory for the young royal. In a surprisingly honest new interview with The Telegraph, Harry opens up about the loss of his mother and consequential personal struggle with grief and his mental health, saying that for two decades after her death, he “shut down all of his emotions.”

While the royal family has typically been hesitant to share such personal info, keeping up their prim and proper exteriors, the new generation seems to be more than willing to open up and be real about their lives with the public. That includes Prince Harry, who divulged more than we ever could have anticipated.

Admitting that his older brother, Prince William, tried to persuade him to seek help, Harry reveals that instead, he completely shut down when Princess Diana passed away. Refusing to talk about her or even think about her, Harry, who was just 12 at the time of her death, admitted, “My way of dealing with it was sticking my head in the sand, refusing to ever think about my mum, because why would that help? It’s only going to make you sad, it’s not going to bring her back. So, from an emotional side, I was like ‘right, don’t ever let your emotions be part of anything.’”

He can now admit that it was a dangerous decision, saying, “I have probably been very close to a complete breakdown on numerous occasions, when all sorts of grief and sort of lies and misconceptions and everything are coming to you from every angle.” Leading him on a troubled path that he admits was “total chaos,” Harry finally began to deal with his grief at the age of 28 after suffering from increasing anxiety during royal engagements and feeling like he was “on the verge of punching someone.”

Harry says that it was speaking to a “shrink” (“the Americans call them shrinks… I’ve done that a couple of times, more than a couple of times, but it’s great.”) and taking up boxing that helped him to get that aggression out, allowing him to finally come to what he calls “a good place” these days.

While it’s surprising and sad to realize that Prince Harry was struggling so deeply for so many years, we’re happy to hear that he’s doing much better. We’re sure his mom would be proud!

Are you surprised to learn about what Prince Harry has been going through in the decades since his mother’s death? Let us know @BritandCo!

Desiree O
Desirée O is a ‘Professional Bohemian’ who loves anything and everything related to the arts, entertainment, and pop culture. She ADORES being a ‘Newsy’ for Brit + Co, covering all of the latest tidbits of awesomeness that you want to read about. When she’s not writing, she’s either making messy art, going on long adventurous walks with her camera, or poking around over at bohemianizm (http://www.bohemianizm.com/). You can find out about Desirée O and her work at http://DesireeO.com/ or follow her on Twitter @DesireeO.
Mental Health
Celebrity News
Mental Health Royal Family
More From Celebrity News