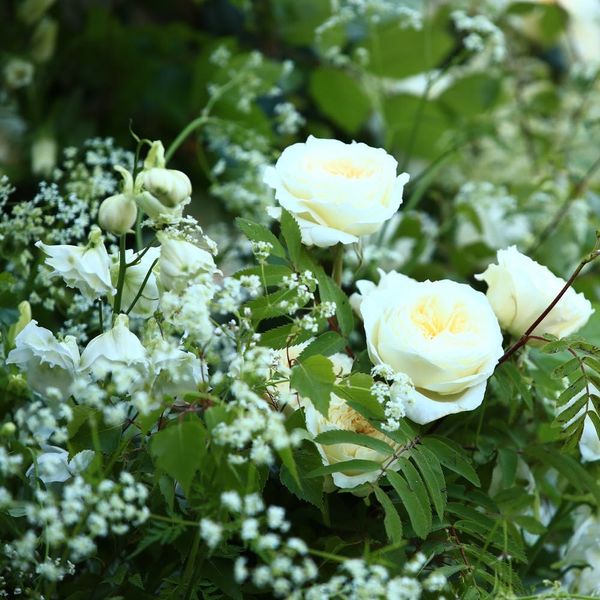 Now that Prince Harry and Meghan Markle’s royal wedding is behind them, they’re making sure its lavish decor goes to good use. Per their original plans, the floral arrangements — some of which adorned the archway where the royal couple shared their first kiss — will be donated to various organizations, and a few have already made their way to patients at St. Joseph’s Hospice in London.

“Today we got a very special delivery,” the care facility revealed in a touching Facebook post. “Beautiful bouquets made from the #royalwedding flowers which we gave to our patients. A big thank you to Harry and Meghan and florist Philippa Craddock. Our hospice smells and looks gorgeous. Such a lovely gesture.” St. Joseph’s also shared a photo of a patient excitedly holding a big, beautiful bouquet.

Made by London-based floral designer Philippa Craddock, the arrangements contained locally sourced branches of beech, birch, and hornbeam, as well as white garden roses, peonies, and foxgloves, much of which was taken from the gardens and parkland of the Crown Estate and Windsor Great Park. Efforts were also made to use flowers and plants that are in season and blooming naturally in May, as well as to incorporate pollinator-friendly plants.

The decorative arrangements at St. George’s Chapel weren’t the only meaningful foliage included in the ceremony: Markle’s bouquet, also designed by Craddock, was hand-picked by Prince Harry from the private garden at Kensington Palace, and included bundles of forget-me-nots — Princess Diana’s favorite flower.

Markle’s bouquet was placed on the Grave of the Unknown Warrior at Westminster Abbey on Sunday, in keeping with a long-running royal tradition.

What do you think of Harry and Meghan donating their wedding floral arrangements? Let us know @BritandCo!