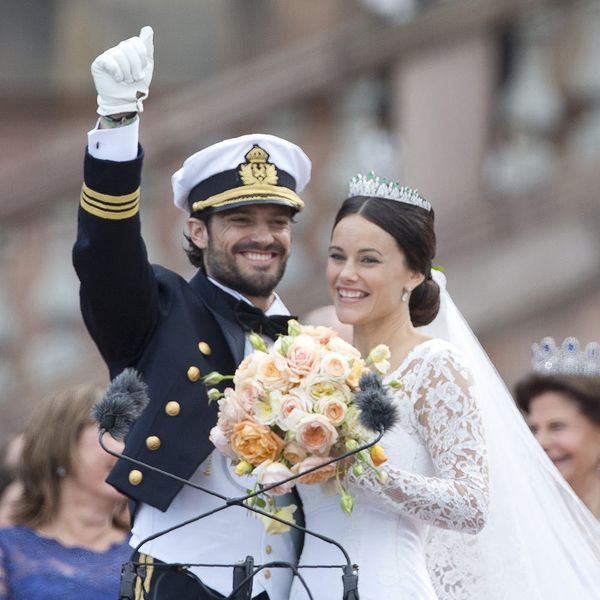 While Kate Middleton and Meghan Markle are two of the most famous commoners right now married (or set to marry) royalty, Sofia Hellqvist of Sweden is another lucky ordinay gal who wed a prince. An when she married to Prince Carl Philip in 2015, she wore a beautiful tiara that was fit for a princess.

The Art Deco-style tiara features graduated diamond palmette motifs topped by a set of graduated pear-shaped emeralds. It was given to her as a wedding gift by her new in-laws, Carl XVI Gustaf and Queen Silvia.

The princess certainly seems to be making good use of her gift. She attended the 2017 Nobel Prize Award ceremony in Stockholm on Sunday wearing a lace gown and a very familiar headpiece. If you look closely at her tiara, you can see that it’s the same one Princess Sofia wore to her nuptials. There’s one key difference, though; the emeralds have been replaced with pearls for a more subtle — but still gorgeous — look.

While the transformation is a temporary one (the emeralds are set to return), it definitely shows off the versatility of her royal accessory. Turns out even nobility aren’t above a wardrobe hack here and there.

What do you think of Princess Sofia’s tiara? Tell us @BritandCo!

Shea Lignitz
Shea can be found in the nearest bookstore or brewery, exploring the great outdoors, or blasting Led Zeppelin. She grew up in the cold and rain of Northern California's redwoods but is currently wandering around Texas.
Celebrity Style
Celeb Style
Celebrity Style Royal Family
More From Celeb Style