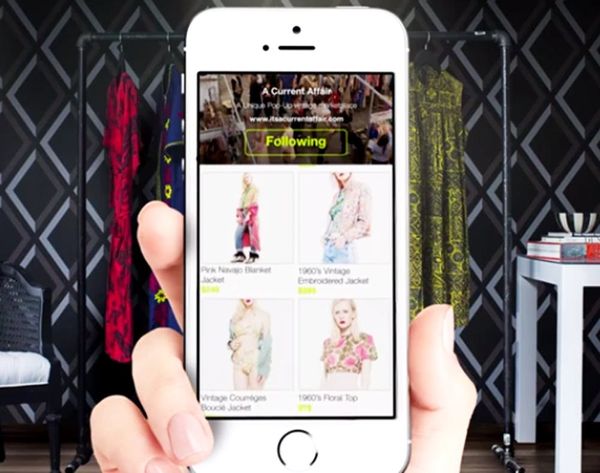 We love collaborations. Kanye West and Jay-Z, Jay-Z and Justin Timberlake, Jay-Z and Solange… Sooo maybe not all collabos are perfect, but often when two great concepts in App World meet and fall in love and have a little baby app with features from both of its good-lookin’ parents, they are. This week, we downloaded an app that combines the feel of Instagram with a favorite pastime (shopping!) and tasked the new Foursquare with taking on party planning in its remixed second offering. Get the DL on what we DLed below!

1. Swarm: It’s heeeeere! We told you about Foursquare’s plan to split their app into two, and Foursquare v2.0 Swarm is now available to download. The new social network skips mayor status and keeps it all in your friend family with a much bigger focus on seeing where your BFFs are and what they’re up to. Check-ins are shiny and new and like a social status meets text with fun emoji-esque extras.

It’s helpful to have an app that lets you creep on your friends’ locales when that app also wants to help answer the question “Where the party at?” One of the cooler new features of Swarm is that you can check out people’s plans and suggest your own. Post to see if anyone wants to head to Maker Faire today and your friends get the option to chime in and join your fun or offer up their own.

Cost: Free for Android and iOS

2. Reissued: Online shoppers and vintage lovers, get ready for a new mobile marketplace that’s like Instagram meets eBay meets Etsy meets awesome. Reissued brings together the world’s top tastemakers, on-trend curators, and style influencers whose closets and curios you want to shop in. Follow the sellers you like to see and browse their fashion, home, art and music items in a feed of fab, shoppable finds.

3. Litely: We want you to make beautiful things, even if your equipment for making is as simple as your smartphone (pls, do you know how much creativityyou can unlock in that little guy? Endless, we swear!). Litely has a similar desire for you, especially if you want to flex your photography skills beyond the filters offered up in Instagram. This app gives you luscious, film-inspired filters and tones to truly take your pic-snapping game to the next level, whether you’re a shutterbug for fun or use your pictures in any sort of professional way. Bloggers, online celebs, this one’s a worthy investment for you.

Cost: Free for iOS, but those photo preset packages are pricey

4. BreakFree: This feels a little/a lot like an oxymoron, but this is an app that wants to help you break your cell phone addiction. If admitting you have a problem is the first step, maybe making the problem a solution is a really good second step. BreakFree monitors your smartphone usage so you can really visualize how all of those texts and Tweets and scrolls through Instagram add up at the end of the day. It will help you manage your habits and set your own little digital controls, offering tools to disable the Internet, reject phone calls and send auto texts during certain times.

5. Tunnel Vision NYC: Yes, this is a very location-specific one, but the idea is so cool we had to include it. This app brings the MTA subway map to life. Hold it up to the map while you’re bored waiting for your train and unlock data in beautiful, bubbly form to visualize the city in all different ways. Trace trains moving in real-time, see where people are entering and exiting the turnstiles, peek at average rent prices and median income in each neighborhood. The app was written by Brooklyn-based Bill Lindmeier as a thesis project at ITP/NYU and NYCers or those visiting the Big Apple this summer, should definitely download this. And folks who make apps, use this as inspo for more like it.

BONUS!!! WhatsApplebee’s: Like What’s App JUST for superfans of Applebee’s, this is a social network that only works when you’re at an Applebee’s restaurant. It’s okay again to have your phones on the table during dinner. Can you imagine how much Julie Taylor’s phone would just be BLOWING up at work? Next week we’re excited to debut Seracen’s Alamo Freeze app (it’s like WhatsApplebee’s meets Whisper and I hope you guys watched Friday Night Lights because it’s the best show and otherwise you won’t get these hilarious jokes).

What were your favorite app downloads this week? Sound off below!