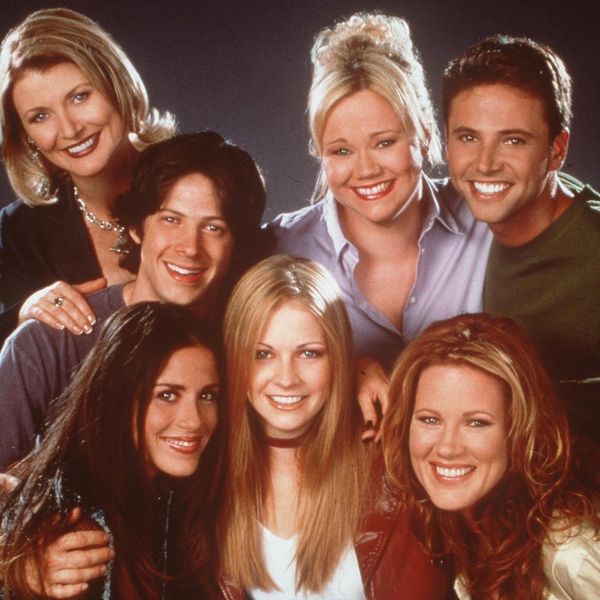 When news broke that the CW was working on a new Sabrina the Teenage Witch-based Riverdale spinoff, The Chilling Adventures of Sabrina, we couldn’t help but reminisce about how much fun the late-’90s ABC sitcom was (Salem the sassy talking cat was the BEST!). Needless to say, it warmed our ’90s hearts to see the stars of the TGIF lineup staple reunite for the first time in 20 years (!) at an LA Comic-Con panel this weekend, taking full advantage of the heartwarming photo opps in the process.

Updates flooded the social media feeds of the cast, with Donovan calling the day “Such a beautiful day of reminiscing and laughing and love!”

As the RL Sabrina Spellman revealed, it was actually the first time some of the actors and actresses had ever met, having appeared on the show at different times.

Sabrina was on the air from 1996 to 2003, moving from its original ABC home to The WB for its final three seasons. Though the CW’s new reboot won’t see any of the original cast appearing, Hart has previously envisioned her own ending for Sabrina and Harvey, telling POPSUGAR that she sees them as settled-down suburban parents.

She expanded on that fictional story line at this weekend’s panel, saying that they’d probably be into training the next generation of witches.”[We] probably started our own, like, Hogwarts,” she quipped of Sabrina and Harvey. “Started our own little witch school, maybe foster some children that are part mortal, part witch, and [teach them] how to navigate that world.”

As for the rest of the cast, Broderick envisioned Aunt Zelda as an Uber-driver for the Other Realm, while Ballard saw Quizmaster as a “nanny teacher” living in Miami. Aunt Hilda didn’t fare as well, with Rhea predicting a bleak fate of longing for Drell alone with Salem.

Other guesses included a punk rock band for Roxie, a well-to-do Morgan, and as for Josh? Well, he’d “probably [still be] stalking Sabrina.”

Bakay was very into the idea, even saying “I say screw The CW. We got the project right here!”

We, for one, would TOTALLY watch!

Did you watch Sabrina the Teenage Witch in the ’90s? Let us know @BritandCo!