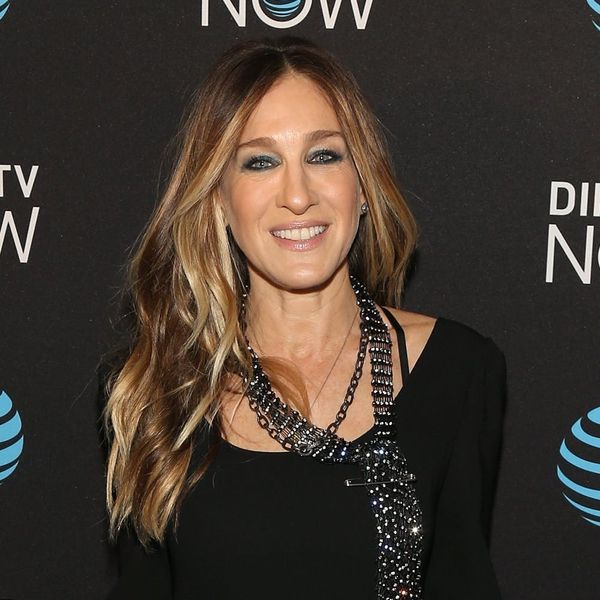 When we think of Carrie Bradshaw, er, Sarah Jessica Parker, we think of fabulously bold fashion and, natch, shoes, shoes, SHOES! That’s why we were super psyched when the former Sex and the City star launched her very own shoe line and introduced us to her absolutely adorable LBD. Now, we’re ready to slay just like SJP, as the actress and fashion mogul has announced that she’s opening her very own store.

Taking to Instagram to let fans in on the big news, she added the caption, “Today I reveal every detail of our long held secret!” In the pic, we see the star herself (or the back of her) in a hard hat and work vest as she tours the surprisingly spacious and wonderfully bright space that will be the home of her future retail venture.

Alright NYC. I've neglected you long enough. I'm swinging by @bloomingdales SOHO next Tuesday 11/22. (Broadway between Spring and Broome for those unfamiliar.) I'll be working the shoe floor and helping ladies (and fellows!) shop the newest @sjpcollection styles. This is quickly becoming my new favorite job, if you couldn't tell. I'll be there around 11am. For just a few hours before I have to scurry off to my next meeting. Follow @sjpcollection for all the details. See you then? X, Sj

She added, “After many trips on @amtrak to DC, on-site construction visits, meetings on design and curating a very special collection we are opening our first standalone @sjpcollection store inside the brand new @mgmnationalharbor.” If that’s not completely clear, it means that Sarah’s store will not be in New York City as one might expect, but instead will be in Washington, DC, at the new casino and luxury retail center, MGM National Harbor.

She also gave us some crucial deets, such as the fact that the big opening will take place on December 8 (so soon!). We’ll also be able to catch further updates via the SJP collection Instagram account, which shows us some of the fine fashions we’ll now hopefully be able to nab in-store.

Twirling into our morning with #SJPCollection Fawn. In a glittering "Glow" fabric that's sure to cure those Monday blues. Many thanks for yet another stunning image, @bloomingdales. You never disappoint! X, Sj

Comfort, ease and a dose of metallic shimmer. Our #SJPCollection Gelsey flat has it all, and then some. The perfect companion, no matter where this weekend takes you. Available now in "Stunned" at @bloomingdales, @amazonfashion, @zapposluxury. X, Sj

These #SJPCollection Westminsters will happily wait around anywhere. In this case patiently awaiting their entrance last night on @fallontonight. Their arrival is right on time for holiday parties, a morning meeting and anywhere in between. With or without your favorite black, purple, grey or nude stockings or fishnets. I'm going to do it all! Available now exclusively at @netaporter. Happy Thanksgiving and all my love. X, Sj

This afternoon calls for a pop of color and our treasured "Candy" satin fits the bill. Whether for work or play, #SJPCollection Fawn is ready to take on the day. Thanks to @amazonfashion for brightening our morning with this charming image. You never fail to "wow" us! X, Sj

We can’t wait to see more from this surely slay-worthy new shop.

Will you be checking out SJP’s new store? Tweet us @BritandCo!

Desiree O
Desirée O is a ‘Professional Bohemian’ who loves anything and everything related to the arts, entertainment, and pop culture. She ADORES being a ‘Newsy’ for Brit + Co, covering all of the latest tidbits of awesomeness that you want to read about. When she’s not writing, she’s either making messy art, going on long adventurous walks with her camera, or poking around over at bohemianizm (http://www.bohemianizm.com/). You can find out about Desirée O and her work at http://DesireeO.com/ or follow her on Twitter @DesireeO.
Celebrity Style
Style News
Celebrity Style