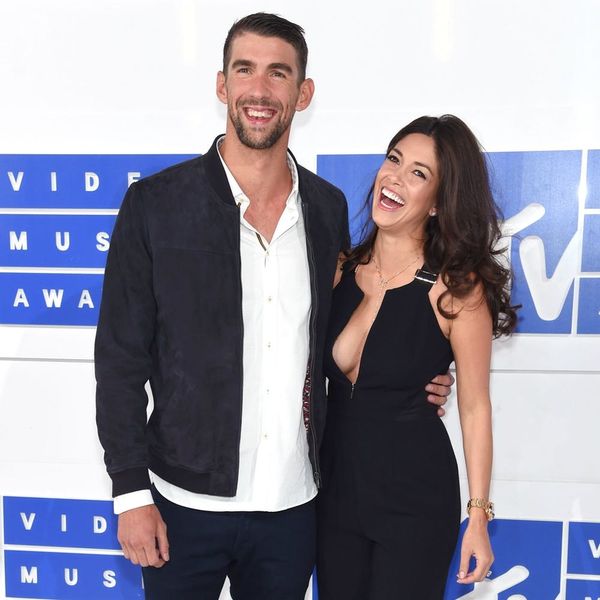 Michael Phelps and Nicole Johnson — make that MRS. Phelps, as she’s officially changed her Instagram page to read ― shocked the world when they revealed that the official ceremony we’ve all been waiting for between Boomer’s parents apparently already happened earlier this summer.

Secretly tying the knot in June, Michael spilled the beans to fans last Thursday in a Facebook live post that he and baby momma Nicole had “been married for a couple months. “

While we’re not entirely sure what he meant by that (something for themselves, maybe?), it appears the duo is willing to share the deets of their second ceremony with us, the likes of which reportedly happened in Cabo over the weekend, despite earlier reports of plans to have a big bash on US soil.

“My best friend…I love you!” Michael sweetly captioned this shot of them walking down the aisle hand in hand.

Nicole answered right back with an adorable snap of her own, saying, “Truly the happiest day of my life @m_phelps00.”

Um, can we just take a second to talk about that gorgeous dress? Almost vintage with its wrap lace top but with a thigh-high slit to keep it fresh, Nicole’s frock rendered her absolutely stunning. Michael looks every bit as dapper himself, rocking a light khaki tux with a baby blue tie.

“Now we just have rings that show that we are,” Nicole adds with a laugh.

Cheers to that. Congratulations, you two!!!

Do you think Michael and Nicole were smart to keep their first wedding a secret? Share @BritandCo!

Nicole Briese
Nicole is the weekend editor for Brit + Co who loves bringing you all the latest buzz. When she's not busy typing away into the wee hours, you can usually find her canoodling with her fur babies, rooting around in a bookstore, or rocking out at a concert of some sort (Guns N' Roses forever!). Check out all her latest musings and past work at nicolebjean.com.
Celebrity Wedding
Celebrity News
Celebrity Wedding Olympics
More From Celebrity News