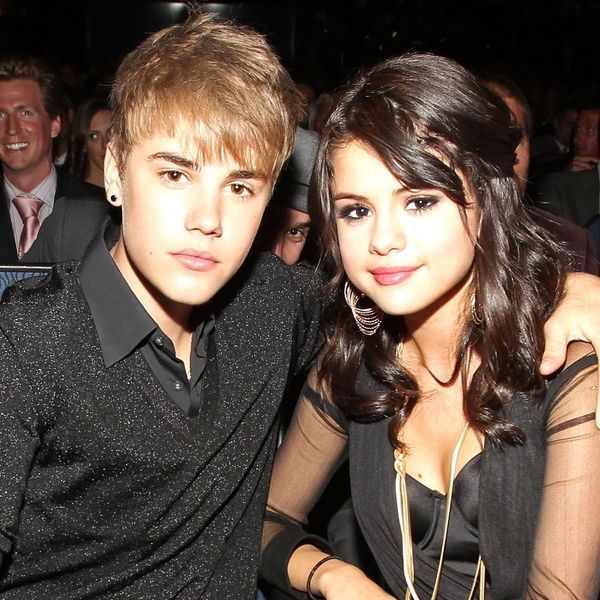 To say that Selena Gomez and Justin Bieber have had a roller coaster of a relationship would be an understatement. The two pop stars, who were first seen holding hands back in 2010, have gone from lovers to enemies and back again countless times over, and now, from the looks of things, they may be trying a new hat on for size: friends.

As TMZ reported, the exes were spotted having breakfast together at Westlake Village this weekend one-on-one.

As far as we know, Gomez, 25, is still dating The Weeknd, who was last seen with his lady in early September — likely due to the fact that he’s currently on tour, soon to be headed overseas.

Still, the photo of Taylor Swift’s BFF hanging with her one one-time love came as a shock to fans, who last saw the former couple throwing shade at one another’s new significant others. Gomez, for her part, posted a snarky comment to her old flame’s Instagram page after he clapped back at fans who wrote angry comments on photos of his now ex-girlfriend, Sofia Richie. “If you can’t handle the hate, then stop posting pictures of your girlfriend, lol,” she wrote. “It should be special between you two only. Don’t be mad at your fans. They love you.”

Though she later apologized for the remark when the “Love of My Life” singer deleted his account, the damage appeared to be done, with Bieber, 23, calling The Weeknd’s music “whack” and mocking his hit, “Starboy.”

Now, the sight of Jelena together again once more, if only as pals, has fans in a tizzy, with some hoping they’ll get back together and others praying that they don’t.

I 💯💯💯💯💯💯💯💯💯💯 think @justinbieber and @selenagomez should get married and then that's that really. But that's what I think.

me: jelena is toxic i don't even ship them anymore
also me>youtube>jelena's halo justin bieber and selena gomez cute moments

MY JELENA VIBES OR FEELINGS OR WHATEVER YOU WANT, ARE BACK.
SORRY BUT I’M NOT SORRY #jelena #Jelenaisback @justinbieber @selenagomez pic.twitter.com/kbi6LQuW0P

Selena what are you doing?

i don't need this kind of negativity in my life

While the internet may be torn, we’ve got a sneaking suspicion we know which side of the coin Bieber’s mom, Pattie Mallette, who thinks the “Wolves” singer is the one who got away from her son, is on.

Guess we’ll have to wait and see how this one plays out!

Do you think someone can ever truly be friends with an ex? Sound off over @BritandCo.

Nicole Briese
Nicole is the weekend editor for Brit + Co who loves bringing you all the latest buzz. When she's not busy typing away into the wee hours, you can usually find her canoodling with her fur babies, rooting around in a bookstore, or rocking out at a concert of some sort (Guns N' Roses forever!). Check out all her latest musings and past work at nicolebjean.com.
Celebrity Breakups
Celebrity News
Celebrity Breakups Celebrity Couples Selena Gomez twitter
More From Celebrity News