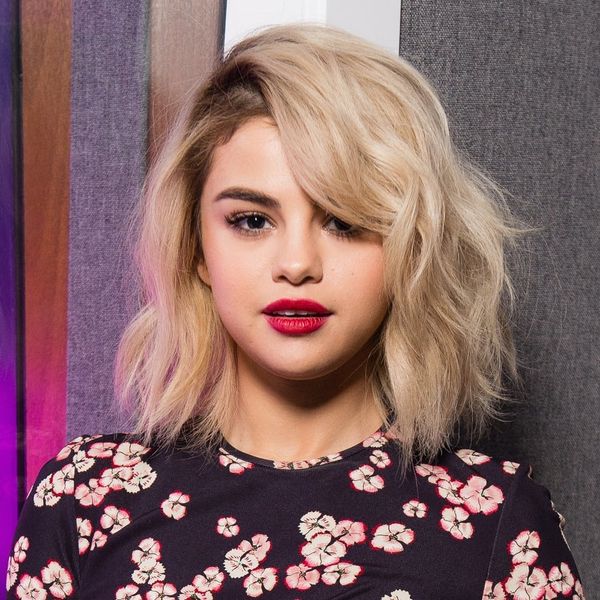 Selena Gomez set the internet ablaze back in November when she stepped out at the American Music Awards with brand new blonde hair. They say “nothing gold can stay,” however, and it seems to be true for the “Wolves” singer, who has already said buh-bye to her flaxen locks less than 30 days after their debut.

Despite telling E! earlier this month that the blonde hair wasn’t “going anywhere,” the pop star was spotted out wedding dress shopping with her cousin, Priscilla DeLeon near Dallas, Texas over the holiday weekend, where she bought DeLeon’s dress for her. It was her coif that fans focused on, though, with many quick to notice that her tresses were back to their original brown hue.

When your maid of honor makes your dream dress a reality and surprises you with it!

Gomez, 25, will be maid of honor on her cousin’s big day, and unless she makes another major change, it seems she’ll be walking down the aisle as a brunette.

so i am blonde now

The singer first tried out blonde hair earlier this summer in her music video for “Bad Liar,” when she rocked a vintage-style feathery wig, and went blonde again last month (which she announced with an Instagram post captioned simply, “so i am blonde now.”)

The hearts want what it wants, though, and it appears Gomez’s heart is with her lush brunette locks… at least for right now.

Which of Selena Gomez’s hairstyles has been your favorite so far? Tell us @BritandCo!

Arielle Tschinkel
Arielle Tschinkel is a pop culture junkie who went to NYU because the Olsen twins went to NYU (really). She is a freelance writer whose work has also been featured on HelloGiggles, Refinery29, SheKnows, Bustle, Hollywood.com, and many others; and she's living her dream one Britney Spears GIF at a time. Follow her on Twitter @mrstschinkel or visit her website at arielletschinkel.com.
Celebrities
Hair
Celebrities Celebrity Hair Selena Gomez