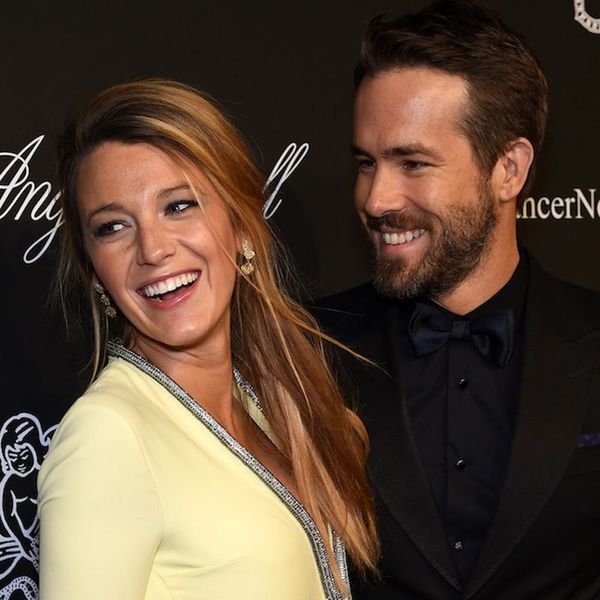 In a year that saw the end of a Taylor Swift relationship that seemed destined to last and the divorce of Brangelina, it’s not hard to feel cynical about love — never even MIND trying to find it in Hollywood. But for every breakup this year, there’s been an amazingly adorable moment that’s made us think maybe — just maybe — true love is real and is out there for everyone. Here are some of our fave celeb couple moments from 2016.

1. Meghan Markle and Prince Harry’s Subtle Declarations of Love: First it was the matching bracelets, then this subtle necklace with a tiny “M” for Meghan and “H” for Harry. Gah!

2. Drake and Rihanna’s Whirlwind Summer Romance: It seems like, once again, just as quickly as it began, Drake and Rihanna’s latest fling was over. But that doesn’t mean we didn’t get to swoon over their giddy chemistry and the fact that they got matching tattoos. We have a feeling we haven’t seen the last of #AubRhi. (Photo via Michael Loccisano/Getty)

Funny there's no dad-shaming. When both of us go out to dinner, shame both of us so Chrissy doesn't have to take it all. We'll split it.

3. John Legend Standing Up for Chrissy Teigen Against Mom-Shamers: Literally every day of Chrissy and John’s life together seems like #RelationshipGoals. But in the spring, when they were spotted out for dinner without their newborn daughter Luna, the internet attacked Chrissy for being a negligent mom. John quickly stepped in to point out the ridiculous double standard and shut down the mom-shaming. SWOON.

4. Blake Lively and Ryan Reynolds Acting Like Teenagers in Love: The sweetest boob grab there ever was.

@jennaldewan I'm not sure if this woman is my Rainbow or my pot of gold but I'm lucky either way happy birthday cake baby!

5. Channing and Jenna Dewan Tatum’s Over-the-Top Romance: It’s hard to pick a standout moment for these two lovebirds, who are NOT shy about declaring their love for each other, sharing epic family moments or reliving sweet memories in their romance.

My back-up plan: professional wrestler trained by @davebautista and @prattprattpratt @unqualified so lucky I didn't break my neck-thanks guys!

7. Adam Levine and Behati Prinsloo Having Their First Baby Together: These two were clearly SO excited to welcome little Dusty Rose together, so much so that Adam couldn’t help but dish details like revealing the baby’s gender while out doing press circuits. Proud papa!

8. Kanye West’s Adorably Heartfelt Birthday Gift to Kim: Kanye outdid himself with a private orchestra performance for mother’s day and, uh, that ROCK, but the video he put together for Kim’s birthday of old Kardashian family movies took the cake. Sniff.

Hey @brooklynbeckham I like the way ya look at me, that's all :)

9. Brooklyn Beckham’s Body-Positive Advice for Chloe Grace Moretz: Though short-lived, the romance that these two shared had so many sweet moments, including the wise words of encouragement Brooklyn would often give to Chloe when she needed them. Awww.

10. Gigi Hadid’s Supportive Message to Zayn Malik After Bad Anxiety Made Him Cancel a Huge Show: Earlier this year, Zayn had to cancel his first solo show after leaving One Direction due to extreme anxiety, something he felt he needed to be honest about. In a very public display of affection and support, Gigi tweeted a response letting him know how proud she was of him.

I know it's a little cheeky, butt... Cycling in The ile de re, France 🇫🇷

We are The Wilsons!

12. Ciara and Russell Williams’ Surprise Wedding: These two lovebirds snuck off to a castle in England to tie the knot this summer, and it looked like a literal fairy tale.

13. Amy Schumer and Ben Hanisch’s #CoupleGoals HalloweenCostumes: These two have been making us swoon since meeting on a dating app and clearly being head over heels for each other since the year started.

14. Liam Hemsworth’s Most Perfect Birthday Celebration for Miley Cyrus: These two have tried to keep a low profile, but with speculation about their reunion and re-engagement swirling all year, it’s been tricky to manage. They’ve been letting their guards down a little, being less shy about showing their lives together on social media, and last month we got to see just how well Liam knows and cares about his girl when Miley posted pics from the AMAZING birthday celebration he threw for her on Insta. Too cute.

What was your favorite celeb couple moment this year? Let us know over @BritandCo!