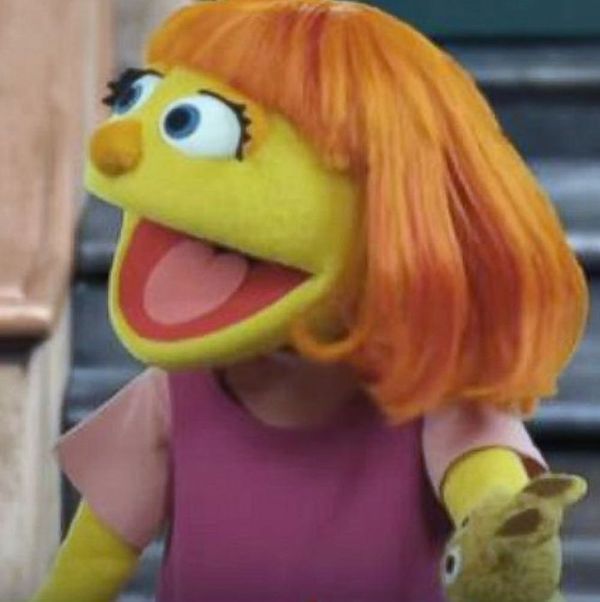 For the first time in 10 years, there’s a new resident moving on to Sesame Street. Her name is Julia, and she has autism.

Julia is a four-year-old with red hair and big green eyes, and is close buddies with established Sesame Street muppets Abby Cadabby and everyone’s favorite little red monster, Elmo, according to NPR. Julia has appeared in the Sesame Street universe before, but will make her debut as an official muppet this week.

Through Julia, we aim to show that all kids are amazing, and that all kids can be friends. #SeeAmazing pic.twitter.com/NHPytuDLFO

Julia appeared in the world of Sesame Street for the first time in the online digital storybook, Sesame Street and Autism: See the Amazing in All Children in 2015, Entertainment Weekly reports. According to NPR, viewers can expect to see Julia in two episodes this season, and even more in seasons to come. It’s a huge deal, especially for people with autism.

“If done well, this representation could lead to a lot of autistic youth knowing they have a community,” says Kit Mead, a queer, non-binary trans autistic activist who writes about mental health, autism, and disability.

Mead was diagnosed with autism at age 14, and “still didn’t know I had a community until I met other autistic people in college, because no one taught me about community and there wasn’t much representation. I basically learned I was alone, and maybe I wouldn’t have felt that way if I had been able to see others like me.”

Now with Julia on Sesame Street, Mead tells us they are “hopeful that this will help autistic kids learn about autistic community and feel like they aren’t alone.”

We’re excited to announce a new friend joining us on Sesame Street! She’s Julia, a 4-year-old with autism! #SeeAmazing pic.twitter.com/xDS3x2a5za

Executive Director of the Autistic Self Advocacy Network Julia Bascom tells us over email that the organization is “thrilled that Julia has made her television debut, and we hope to see her included as a regular part of Sesame Street‘s programming.”

Bascom adds that “It’s essential that kids with disabilities, including autistic children, get to see themselves reflected and represented — not just in special episodes, but in day-to-day content and stories.”

CBS’ 60 Minutes went inside the Jim Henson Workshop where muppets are made on Sunday to speak with Rollie Krewson, the puppet maker behind Elmo and now, Julia. Krewson told 60 Minutes that Julia’s autism was a factor in her design. “She has to have an intense look,” Krewson said of Julia’s eyes, “but she has to look friendly.” Krewson also said that she intentionally made Julia’s bangs short so they wouldn’t be a distraction to the character, and kept any trimmings such as buttons and bows out of her clothes for the same reason.

According to Autism Speaks, a leading autism education and outreach organization, one of the signs of autism is easy distraction, so Sesame Street took care to incorporate that as one of Julia’s character traits, right down to her hair and clothes.

NPR reporters who recently visited the set of Sesame Street had the chance to talk with Abby Cadabby about Julia. Abby explained that sometimes it takes a few tries to get Julia’s attention when someone wants to talk to her. “That’s just Julia being Julia,” Abby told the NPR team.

What do you think of Julia joining Sesame Street? Let us know on Twitter @BritandCo.

Elizabeth King
Elizabeth King is a politics, history, and culture writer based in the Twin Cities. She is generally pretty cranky but still enjoys traveling, music from the early 2000's, and plotting the resistance. Feel free to say hi on Twitter at @ekingc or check out some of her work at www.elizabethcking.com.
Pop Culture
More From Pop Culture