Seth Meyers and Wife Alexi Ashe Are Expecting Baby No. 2! 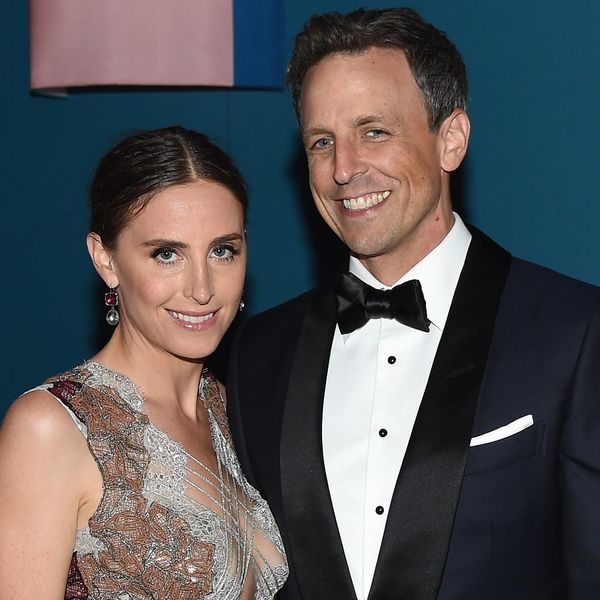 What a week it’s been for Seth Meyers! Just one day after the Hollywood Foreign Press Association announced that the funnyman would be hosting the 2018 Golden Globes, Meyers revealed that he and his wife, Alexi Ashe, are expecting their second child.

The proud dad-to-be shared the news last night on his talk show, Late Night With Seth Meyers. He was joined by his parents, Larry and Hilary, and his brother Josh, which should have been our first clue that it was a special episode.

“I want to take this opportunity now [to tell you that]… my wife and I are expecting a second baby,” he told the audience. When the crowd let out a thrilled cheer, he added, “Very excited. Thank you! Very excited.”

Afterward, his mother revealed how she found out about the upcoming arrival. “I get the phone call, and my Seth is sometimes a crier. … He’s crying on the phone and he can’t catch his breath, he’s sobbing, and I said, ‘What? What happened? Are you okay?’ And he said, ‘No, no, it’s wonderful news. We’re going to have another baby.’ And I said, ‘That’s fabulous! Why are you crying?’ He said, ‘Because for over a month, I’ve had to pretend that I don’t care what sex it is and I do care, I want a little boy!'”

The comedian, who married his wife back in September 2013 and became a dad to Ashe in March 2016 (yep, that’s little Ashe wearing the turkey costume and dancing to Beyoncé), backed up his mom, saying, “That’s true, I really wanted a brother for my son because I was so lucky to have one.” Aw!

The grandparents even have a named picked out: Albert! Why Albert? Well, as Meyers’ dad explained, “We’ve had five sheepdogs and they’re all named Albert. We have Albert V. And I really love the dog and I always wonder what it would sound like if we could talk.” (This is NOT the explanation that we were expecting.) He continued, “I never hear, like, a voice from a cartoon or a movie or a child that [makes me think], ‘That’s what Albert would sound like.’ So, I figure if they name the kid Albert, eventually he’ll start to talk and I’ll say, ‘Oh, yeah, that’s it.'”

Were/are you eager for your child to have a sibling? Let us know @BritandCo!