Here’s When (and Why) You Should Opt for Organic Groceries 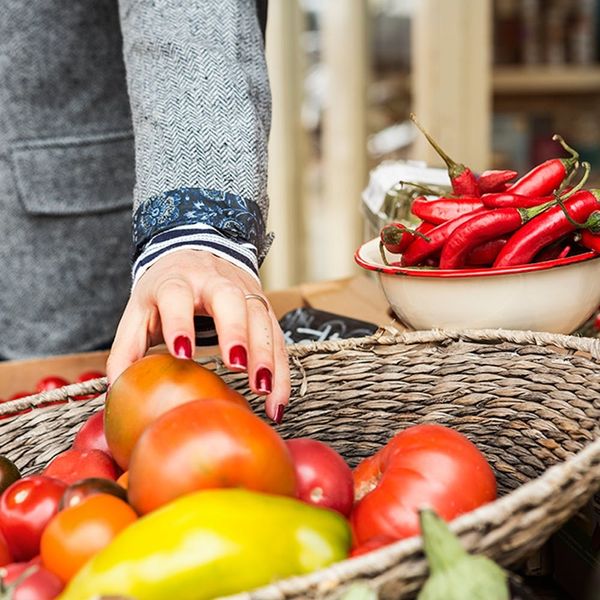 How many hours have you lost at the grocery store, trying to decide whether to spend a little more on organic coffee beans, produce, or granola bars? Sometimes there are ethical reasons to spend the extra cash, like when you’re supporting a sustainable tea company that’s carbon conscious. But if you’re choosing organic because it *sounds* healthier, we might have some bad news. Before you memorize the “Dirty Dozen” organic produce guide, here’s what you need to know about shopping organic.

What Does Organic Certification Actually Mean?

“The USDA oversees a certification and labeling process in which foods labeled ‘organic’ have to meet strict government standards,” explains Natalie Allen, RD and instructor of biomedical sciences at Missouri State University. The USDA organic seal can only be used when a product’s ingredients meet these standards. For example, certified organic farmers can only use pesticides from an approved list.

“The most important thing to remember is that ‘natural’ is not the same thing as ‘organic,'” says Allen. That’s because there’s no equivalent set of guidelines attached to the term “natural,” which could mean that a product was made without artificial ingredients, but could just as easily mean nothing at all.

Denis Ring, who launched Whole Foods‘ 365 Everyday Value line before founding OCHO Candy, says that last year, 80 percent of Americans had organic products at home. “Organic consumers want to avoid the chemicals and additives that might be harmful; they want food that’s safe,” he explains.

The big safety question is around pesticides. Hardcore organic proponents worry that the stuff used on conventional produce could harm the environment — and us. Arguing for the other side, scientists point out that pesticides are tested for safety and closely regulated. (Some on Team Organic also feel nervous about GMOs, which are also subject to strict monitoring, and in some cases allow farmers to use less pesticide and/or less water.)

Ring finds that new moms often get into buying organic when sourcing healthy baby foods. “They want to know who makes what they’re eating and what’s inside,” he says. For many, the regulations around organic certification offer peace of mind.

Are Organic Foods Any Healthier?

8fit Registered Dietician and Health Coach Lisa Booth points out that the “certified organic” label can lull us into a false sense of nutritional security. “One of the biggest misconceptions is that ‘organic’ means ‘healthy,'” she says. “There are many processed foods like bars, baked goods, and sweets that qualify as organic but contain loads of sugar and are refined, meaning they’ve had many essential and healthy nutrients stripped away before they wind up in your hands.”

The same holds true for organic produce. “You will still get the same amount of healthy antioxidants, vitamins, minerals, and fiber from your produce that is not organic,” says Brigitte Zeitlin, MPH, RD, CDN, and owner of BZ Nutrition. “And you will still get the same protein from your dairy, eggs, and meats/poultry.” As far as nutritional value goes, Zeitlin explains, organic foods are more or less identical to their non-organic counterparts.

But there are some factors we haven’t yet figured out how to account for. “Some studies show that organic produce contains more vitamin C, iron, magnesium, and phosphorus, and fewer nitrates,” says Booth. However, she notes that the current research is conflicting and inconclusive, and that it fails to consider key factors like soil quality.

So When Should You Focus on Organic?

1. If You Suffer from Food Allergies: “Organic may mean fewer ingredients, which could be useful for someone with a severe food allergy,” says Allen. “But it is not absolutely necessary.”

2. When You’re Choosing Animal Products: “In general, I recommend that people buy organic animal products, like eggs, dairy, poultry, and meat, because evidence shows that they contain higher amounts of omega-3 when compared to conventionally farmed options,” Booth explains. “In addition, they contain fewer hormones and antibiotics, so it’s better for overall health to aim for organic, pasture-raised animal products whenever possible.”

3. If You Struggle With Your Five a Day: “A lot of organic focus is on fruits and vegetables, which are typically not well consumed,” says Allen. “The bottom line is that we want people to enjoy more produce, eating a variety of fruits and veggies of different colors. Organic or not, your body will thank you.”

4. To Support Small and Local Producers: “The boom in packaged organics has even helped fuel consumer interest in local farmers’ markets,” Ring explains. He says that smaller, “more interesting” organic brands are winning customers away from the bigger manufacturers. Booth also points out that if you’re looking for “produce rich in nutrients and low in pesticides,” a community supported agriculture (CSA) program can offer a less-expensive route to buying organic, although it may not be certified as such.

5. If You’ve Reacted to Certain Pesticides:Pesticide allergies are super rare (and in some cases, just plain myth). But they have been recorded, so if your doctor has confirmed an allergy to a (non-organic) pesticide, play it safe.

What are your top organic tips? Let us know @BritandCo!