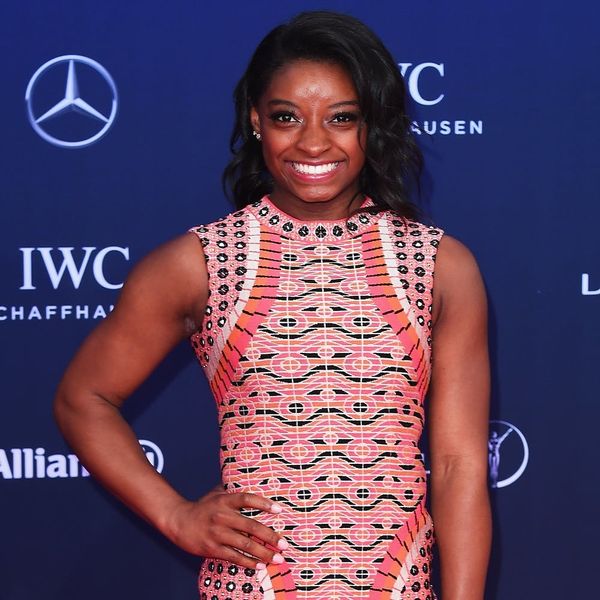 Last year, we cheered with patriotic pride as US gold medalist Laurie Hernandez danced her way to Mirrorball trophy fame on Dancing With the Stars, joining the ranks of the 22 stars who came before her. Now, it’s almost time for season 24 (!), and though we’ll have to wait until March 1 for the full list of cast members to be released on the TODAY show, several names have already been leaked. We’ve gotta say, if these guys and gals are any indicator, it’s shaping up to be quite the exciting season! So far, the line-up includes:

1. Simone Biles: Folks have been speculating for some time that the pint-sized gymnast would be showing off her athletic moves on the show, but it never came to fruition due to her busy schedule… until now. She has previously told ET that she’d love to have Sasha Farber for a partner, and since the news of her presence on the show has been confirmed to the outlet, it looks like it won’t be long before we get to see if she gets her wish! (Photo via Eamonn M. McCormack/Getty)

2. Erika Jayne Girardi: Our fave quirky RHOBH starlet, Erika Jayne (who just shared her “cheap and rich” style secrets with Vogue) has been exclusively confirmed to E! as a cast member of the upcoming season. Hopefully she fares better than her fellow Bravo castmates Lisa Vanderpump and Lisa Rinna, who have both previously appeared on the ABC hit. (Photo via Anna Webber/Getty)

3. Chris Kattan: Though there’s no official word on this one, E! has the former SNL funnyman listed as in “serious talks” to compete on the show, and boy, are our fingers crossed it’s true. *Flashing back to the sweet moves he pulled in A Night at the Roxbury…* (Photo via Frazer Harrison/Getty)

4. Nancy Kerrigan: If the rumors that Nancy Kerrigan will be appearing on the show are to be believed, we’ll be talking about her moves AND the upcoming movie she’ll likely be featured in about her former ice skating rival, in which Margot Robbie will play the lead, I Tonya. (Photo via Bryan Bedder/Getty)

5. Nick Viall: The current Bachelor isn’t a sure thing, but Variety has him pegged as a likely contestant. “I think… it’d be fun,” he said cautiously when asked outright if he’d be joining the cast by ET. Good enough for us! (Photo via Phillip Faraone/Getty)

6. Normani Kordei: One fourth of Fifth Harmony, Normani is also rumored to be showing off her moves on the show (although, really, this seems somewhat of an unfair advantage, considering the group not only sings, but performs choreographed moves on the reg… no?). (Photo via Emma McIntyre/Getty)

7. Mr. T: The pro wrestler and actor (AKA Laurence Tureaud) has also been confirmed for the show by ET after years of producers reportedly attempting to woo him on. It will be a resurgence of sorts for the WWE fave, as he’s kept a rather low profile in recent years. We pity the fool who crosses him in his quest for the trophy! (Photo via Brad Barket/Getty)

Also returning to the Mirrorball stage? Peta Murgatroyd and Maksim Chmerkovskiy, who just welcomed a child, Shai Aleksander, together.

Tune into the show’s premiere on ABC March 20 at 8pm/7c to see them all in action.

Which celeb are you most excited to see on the show next season? Share with us @BritandCo.