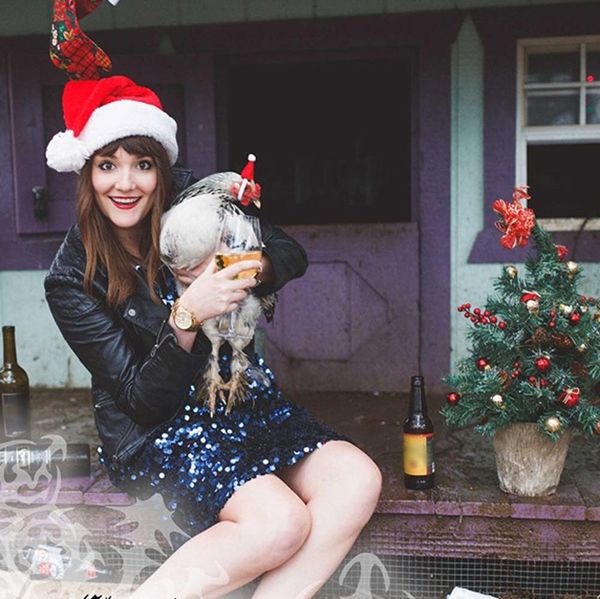 Christmas cards are a fun way to say hello to all your friends and family. But when you’re single, sending a holiday card can be a little bit awkward. Should you send something that features just you and you alone? Well, sure. That’s what 28-year-old Bridget McCartney has been doing for the past six years.

Bridget tells us, “I’m the youngest of five and all my siblings are married with children. All my siblings were doing their own holiday cards and I was the only one still in my parents card. My mom decided that it was a little awkward that out of five children, I was the only adult child in their Christmas card pictures… So the next year, my parents decided to send out a card with just the two of them. That left my parents with their own card and all my siblings (and their families) with their own cards. Acting as the youngest child, I threw a fit and decided to do my own to get back at all of them. I created the first card [pictured above] without telling anyone and sent it to all my family members. It ended up being a big hit amongst my family members. My mother wasn’t all too pleased with the drunk and lonely Christmas card. So of course, I’ve done it every year since.”

Staying true to her 2010 theme, all of Bridget’s cards have been remained equally as boozy as they are hilarious. In 2011 she shared a super fun snapshot from a tea party she had with some stuffed animals. Then in 2012, she decided to also share a fun memory from a party where she was the only person in attendance.

While it seems like 2013 may have been a rough year for Bridgette, 2014 showed some promise as she got cozy with a super handsome fella in a kayak.

This year, Bridgette’s photo is more hilarious than ever. The card reads, “Merry Christmas from me and this chicken.” Why the chicken? Bridget says, “A lot of people come up to me and tell me I should do a Christmas card with a bunch of cats, but I feel like that’s too predictable. So… I tried chickens instead.” Touché, Bridgette.

So, what can we expect for next year’s card? “I have a few ideas,” she teases. “And they all involve alcohol.”

Cortney Clift
Cortney is the senior writer and special projects editor at Brit + Co. She typically covers topics related to women's issues, politics, and lifestyle. When she's not buried behind her computer you'll find her exploring New York City or planning her next big adventure.
Christmas
Most Recent
Christmas Christmas Card Ideas