Some Teens Were Barred From National School Walkouts: Here’s What They Did Instead 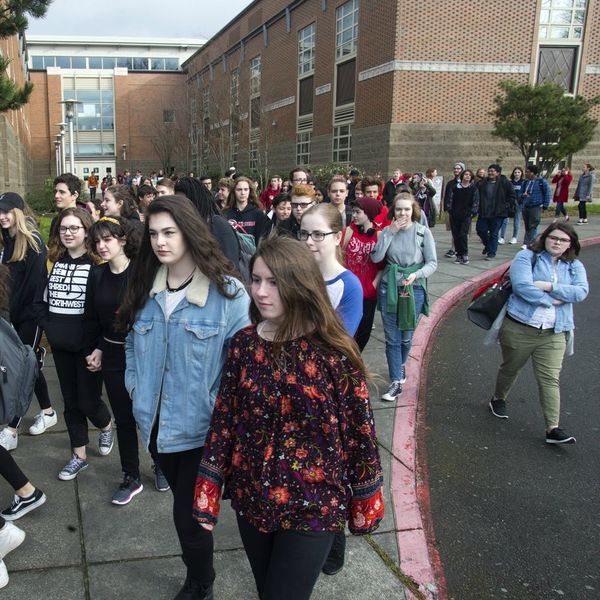 Although thousands of students walked out of their classrooms yesterday for a 17-minute protest against lax gun laws around the country, not every student had the opportunity to share their support. Some school districts and individual schools barred students from protesting, but that didn’t stop their communities for reaching out and showing solidarity.

Students at Booker T Washington High School in Atlanta talking a knee as part of the #NationalWalkoutDay protests. pic.twitter.com/bZpU8kQNjl

At Booker T. Washington High School in Atlanta (the alma mater of Dr. Martin Luther King Jr.), students were told they couldn’t leave the building, so instead, they congregated in the school’s hallways and took a knee — the protest method favored by former NFL great Colin Kaepernick and dozens of other football players over the last two years. Elsewhere in the same state, protests also took a different form.

In Cobb County, Georgia, schools warned students of suspensions and other punishment if they joined the walkout, but that didn’t stop dozens of parents from protesting on behalf of their kids. Holding signs that read “Student Will Change Congress” and “Children Over Guns,” the parents congregated out of Walton High School while their children remained inside.

At Campbell High in the same district, even though students were warned of disciplinary action for participating, the school’s teacher’s silently nodded as many kids walked out to the school’s bus parking lot and read names of school shooting victims before returning to class.

“The school had 17 minutes of silence, and every minute they read the name of one of the victims and a fact about them,” Catie Parker, a student at Campbell, told CNN. “In the bus parking lot, we formed a silent circle with our posters and stood in solidarity for those 17 minutes.”

But not all kids walked out in solidarity. One student in North Carolina was the only student to protest at his school. 16-year-old Justin Blackman was the only one of 700 students at  Wilson Preparatory Academy yesterday. “Umm… hello Twitter, there’s going to be like six people watching this hopefully,” he said in his now-viral post.”It’s National Walkout Day, I’m the only one from my school out here.”

Blackman went back into his school expecting to be in trouble, but according to CNN, he was congratulated by some of his fellow students, leading him to understand that it can take just one person to make a change.

Single student walks out of class on #NationalWalkoutDay under threat of suspension from her New Jersey School. “I want to show I care about it, so I want to do something about it.” https://t.co/xveiiEr9KG pic.twitter.com/6uB61Jpql4

In New Jersey, Rosa Rodriguez faced her own punishment for walking out, but she did so anyway, and her story was picked up by ABC News. Protesting alone, Rodriguez said, “I want to show I care about it, so I want to do something about it,” telling the outlet that she will not fight any punishment her principal may hand down to her for her solo protest.

Did your community take part in yesterday’s walk out? Tell us @BritandCo!